The Wyndham’s Theatre is a grand, late Victorian theatre built in 1899 by Sir Charles Wyndham and designed by WGR Sprague. Its pretty, circular foyer with painted ceiling combined with stunning auditorium decorations makes it one of the most beautiful in the West End. It is also well known for the sound of the underground trains rumbling underneath! More Information 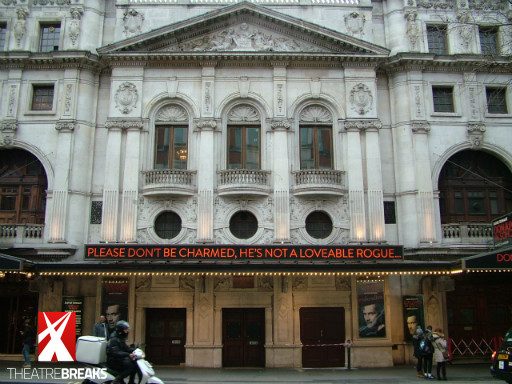 Future, current and past productions at the Wyndham’s Theatre

Lady Day at Emerson’s Bar & Grill
Two legendary singing icons came to the Wyndham’s Theatre during the summer
More +
Heisenberg: The Uncertainty Principle
The creative team from The Curious Incident of the Dog in the
More +
Don Juan in Soho
“Please don’t be charmed, he’s not a lovable rogue…” David Tennant stars
More +
No Man’s Land
Sirs Ian McKellen & Patrick Stewart starred in No Man’s Land in London Theatrical
More +
The Truth
Award-winning playwright Florian Zeller’s comedy at the Wyndham’s theatre has now closed After
More +
People, Places and Things
Tickets for People, Places and Things in London are no longer available to book
More +
Hangmen
Theatre Breaks for Hangmen in London are no longer available to book. See
More +
The Mentalists
Theatre Breaks for The Mentalists in London are no longer available to
More +
American Buffalo in London
Award-winning film and TV star Damian Lewis returns to the West End
More +
King Charles lll Tickets
King Charles III tickets are no longer available to book. See what’s
More +
The Weir
The Weir in London The Weir has now closed in London. The next
More +
Relatively Speaking
Relatively Speaking comes to London in 2013 Relatively Speaking is Alan Ayckbourn’s
More +
Barking in Essex
Barking in Essex Theatre Breaks Although Lee Evans and the cast of
More +
Dreamboats and Petticoats London Theatre Breaks
The early 60’s’ was the dreamiest of times! Maybe you remember the
More +
Abigail’s Party
Abigail’s Party invite to the Wyndham’s Theatre Mike Leigh’s classic play Abigail’s
More +
The King’s Speech in London
The King’s Speech Comes to London This moving story that took the
More +
Christmas Rat Pack Theatre Breaks return to London
Frank Sinatra, Sammy Davis Junior and Dean Martin  returned to London’s Theatreland
More +
Driving Miss Daisy Theatre Breaks in London
This year, London plays host to two of the world’s greatest living
More +
Much Ado About Nothing Theatre Breaks in London
They made a perfect team in ‘DOCTOR WHO‘. They did so again
More +
Here at Theatre Breaks we use cookies to ensure that we give you the best experience on our website. If you continue to use this site we will assume that you are happy with it.OkRead more