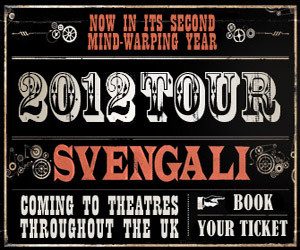 Derren Brown’s stage show Svengali will return to the Novello Theatre for its second London run on 12 July 2012 for 27 performances only.

Interestingly this will put him in town during the 2012 Olympics: I wonder how many coaches will be telling their wards to stay clear, just in case he plants any negative thoughts in their heads? Or will team GB be buying tickets for all of their competitors!

If Derren isn’t putting the kybosh on international atheletes then he will probably be baffling, bamboozling and beautifully bewitching everyone else!

I missed him at the Shaftesbury Theatre (doesn’t everyone miss anything that happens there?) but by all accounts it is an excellent show, done with all the skill, panache and devilry that is apparant in his TV shows.

He is being very cagey about the content, but expect to join in (does one have the choice) and expect to say”what ever else he is, he is bl**dy clever!)

He says “I ask audiences to keep the contents of the show a secret so as not to spoil it for others, and I have to do the same. But I hope it’s fun and freaky and a great night out”.

Svengali is written by Derren Brown and Iain Sharkey with Stephen Long.

Theatre and Hotel packages for Svengali

Theatre and Hotel packages for Svengali will be available soon – check the Shows drop-down for its appearance and when it comes to chosing an hotel, remember to set the “distance slider” on the left hand side of the booking process to limit the choice down to those hotels nearby the Novello.