Sunset Boulevard Theatre Breaks in London are no longer available 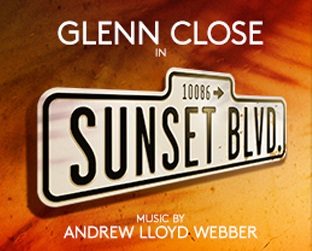 A touch of Hollywood glamour came to the London Coliseum home to the English National Opera company when acting icon Glenn Close reprised her role as Norma Desmond in a semi-staged production of  Sunset Boulevard theatre breaks which ran in April 2016.

Triple Oscar winning film Sunset Boulevard was released in 1950 starring Gloria Swanson and William Holden in the two title roles. Directed (and written) by Billy Wilder, the story revolves around faded silent screen star Norma Desmond who, dreaming of a glorious come-back, moves unsuccessful screen-writer Joe Gilles into her Sunset Boulevard mansion convinced that he will be her ticket to super-stardom.. Living in a fantasy world, Norma’s mind slowly unravels towards madness which ultimately ends in tragedy.

In 1983, British music maestro Andrew Lloyd Webber turned it into a successful West End musical which went on to thrill audiences in both Los Angeles and on Broadway where Glenn Close played the role of Norma Desmond.

The 2016 version of Sunset Boulevard was co-produced by the English National Opera and the Grade Linnit Company who brought us the 2015 production of Sweeney Todd starring Emma Thompson and Bryn Terfel.