What makes someone choose to become a circus performer? It was the question that I pondered as I marvelled at the skills of Anton Belyakov as he teetered over a series of bathtubs at the Underbelly Festival on London’s Southbank during the German circus production of SOAP. What twist of fate had brought him all the way from Russia to London to see him hovering above a full bathtub on London’s Southbank? 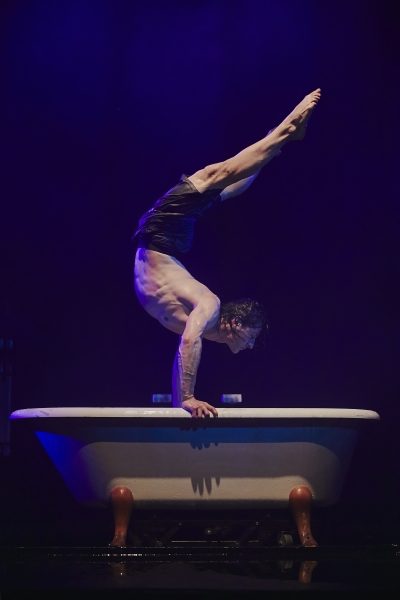 Later I would also wonder how beautiful a contortionist act can be, how you can do that with four towels and how easy it would be to suspend a trapeze above my bath (I bought a whole orchestra of dustbins after seeing Stomp!) and whether my wife would mind.

But mostly I wondered how this insanely talented, beautiful and thoughtfully directed (by Markus Pabst and Maximilian Rambaek) troupe could do what they did without slipping over and making a great big fool of themselves.

So SOAP is a series of skilfully engineered vignettes all with the humble bath tub as the centre. And you know what… maybe “humble” is the most important word in that sentence. There is something about these circus performers that projects a self-depreciating sense of calmness. It seems to come from their quiet self-confidence, crossed with a naive delight at showing what their bodies can do: almost as if they are discovering it for the first time, themselves, as they perform (although that description doesn’t quite quite hold with the supremely confident Daniel Leo Stern as he toys with gravity and the ladies, in equal measure, throughout his bath-defying act!)

So what makes an athlete become a circus performer instead of an Olympic gymnast, for example? Seven generations! that’s what! The international troupe is gleaned from circus performers from around the world. Some new to the genre, some born swinging from the umbilical cord, all with CV’s incorporating the very best names of the genre.

The show starts with a group number – each performer with their own bath – but throughout the show they swap and mingle, with the quantities of water increasing at every turn, as they each showcase their own very unique skills.

The show starts with a water cannon playfully wheeled out by clown, Marie-Andée Lemaire, tempting a luckless member of the audience, to join her in her machinations and ends with a full water curtain pouring down upon an already water-logged stage. In between we are treated to Vanessa Alvarez’s remarkable foot-juggling towels Lena Ries’s achingly beautiful, choreographed contortions and jaw-dropping dance trapeze from Mortiz Haase – a skill that the multi-talented Haase learnt for this show!

Singing in the bath is also taken to new heights by operatic diva Jennifer Lindshield as she gives a watery spin on tunes from Rimsky Korsakov’s Splascheherazade to Beethoven’s Splash Elize! The sound is good, but “splish-splosh” does have it’s comic limits, mindless of how beautifully it is sung or what register it is sung in.

Adem Endris Yemam shows us how a juggler might get ready for a bath, later working his way up to controlling no less than 8 balls in the process. He is obviously a skilled performer but, on the night I saw him, gravity had more of a say over the act than he might have liked. But that’s the thing about good looking, half-naked jugglers: no-one really minds.

Fortunately the two muscle boys won their battles against gravity, as a variety of straps, blocks and chains kept the impressively built Daniel Leo Stern and the aforementioned Anton Belyakov, aloft, in a series of acts that bought gasps from an audience who were revelling in how wet they were getting – especially the front row, who were thoughtfully given plastic sheets but were all too often too slow in their deployment!!

This performance of SOAP was the perfect centre piece to the 10th Birthday Party for the Underbelly Festival. Just as our intrepid performers teatered on the edge of their baths without falling in, so has Underbelly on the banks of the Thames and, after 10 years, has become a dynamic and important part of the London skyline – both physically and culturally. Congratulations to Underbelly directors Ed Bartlam & Charlie Wood who I hope will continue to bring so much joy to the Southbank.