Theatrical royalty arrived at the Wyndham’s theatre in September 2016 as stars of The X-Men movie franchise, Ian McKellen and Patrick Stewart, reunited on stage to play the lead roles in Harold Pinter’s No Man’s Land. 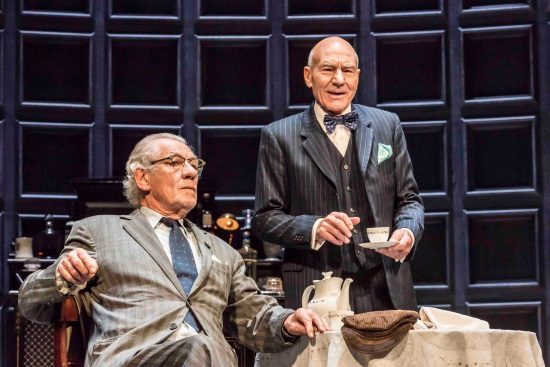 Three years ago the two British actors played the same parts on the New York stage which ran in rep with Samuel Beckett’s Waiting for Godot and this year visitor’s to London’s West End will have the chance to see these two acting greats in the flesh!

Pinter’s No Man’s Land is about a chance meeting of two writers, Hirst and Spooner, in a north London pub. They start drinking, exchanging  often fantastical stories back and forth, eventually moving on to Hirst’s mansion near by. As the night draws on, they get more and more inebriated  with their stories becoming more and more unbelievable which is further complicated by the arrival of two sinister younger men.

Patrick Stewart said of the casting “I saw the original production of No Man’s Land three times in one week at Wyndham’s Theatre and would have seen it more if I could have afforded the tickets. I made a promise to myself that one day I would play Spooner or Hirst but to be doing it back at Wyndham’s with Ian McKellen was a fantasy I never entertained.”

Co-star McKellen added “Playing Spooner to Patrick’s Hirst on Broadway was a constant joy, which is why I am delighted to be back with him in the West End.”

No Man’s Land was directed by Sean Matthias who directed both actors in their Broadway shows in 2013 and also brought the last revival of Truman Capote’s Breakfast at Tiffany’s to the Theatre Royal Haymarket in 2009.