Home > Archive > My Family : Not the Sitcom

David Baddiel’s My Family : Not the Sitcom was at The playhouse theatre 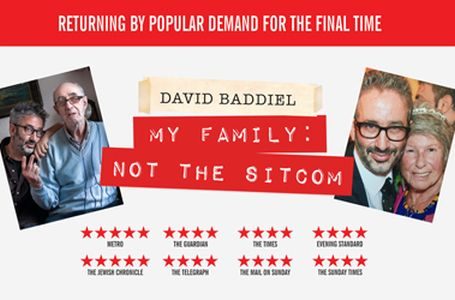 Described by one critic as “Who Do You Think You Are? meets You’ve Been Framed “, this is a fond tribute to the lives of Sarah & Colin – comedian David Baddiel’s parents.

Billed as “a massively disrespectful celebration” of his late mother and his dementia-suffering father’s lives, Baddiel’s solo show My Family: Not The Sitcom returns to the West End this Spring at the Playhouse theatre for a limited run.

Digging beneath the surface, recalling their oddities, peculiarities and idiosyncrasies Baddiel celebrates his “wonderful” memories of his parents with an audience who are invited to come and be offended on his behalf.

My Family : Not the Sitcom was both provocative and hilarious.

Please note that this show contains explicit language and is unsuitable for children under the age of 16 years.

Hotels close to the Playhouse theatre & My Family : Not the Sitcom

At the top of Northumberland Ave along the Strand  is the four star Amba Hotel charing Cross  and a bit further on is the four star Strand Palace Hotel – one of Theatreland’s most favoured hotels. For five star decadence there’s also the world famous Savoy Hotel and the ultra trendy 5 star ME London hotel with its uniquely named rooms and its cool bars and restaurants.

If you don’t want to stay nearby you can catch the underground from  Embankment tube station which takes you West to Kensington or East to Tower Hill on the District & Circle lines . From the theatre you can easily walk across the Thames where hotels, on the south side of the river, are usually a bit cheaper. Take a moment to enjoy the beautiful views up and down the Thames as you cross it – especially breathtaking when it’s all lit up at night!