An announcement from the stage may not only be the best way to stop phone users, it might make it more likely that your show will be a hit! 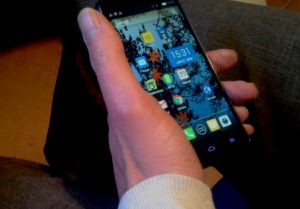 It is no secret that one of the big annoyances for theatregoers is a play interrupted by the ringing of a mobile phone. In Theatre Breaks’ recent Theatre audience survey, audiences felt that by far the most popular solution to the problem of mobile phone usage, was a personal announcement, made by a company member, from the stage.

Of course, many theatre practitioners are against the practice, but Simon Harding of TheatreBreaks.co.uk argues that not only are theatres beholden to do all they can to deal with the problem but also that this desire for interaction, from the stage, may be deeper rooted and its provision an added benefit far beyond a quiet auditorium!

In Dr Ben Walmsley’s paper, “Why People Go to the Theatre: A Qualitative Study of Audience Motivation”, Walmsley used Brown and Novak’s 2007 research on the impact of live cultural events on an audience and Pitt’s 2005 research into audience roles at a chamber music festival, to demonstrate how creating empathy between audience and the company will increase the likelihood that the audience will enjoy the show and that the show will be a hit!

The job on the night is to take that anticipation and create a feeling of empathy which, by successfully doing so, will increase the captivation that the audience wants to feel.

Walmsley makes the point that “As captivation correlates most highly with satisfaction it therefore represents the holy grail of the producer.”

How to engender a feeling of empathy between audience and company

The Theatre Breaks survey showed that a friendly welcome is important to a good night at the theatre but that audiences also look for special events, photo opportunities, meet-the-cast and pre-show talks (a finding backed up by Pitt’s research in 2005) to make the experience feel more “special”. All of these activities are proven to build empathy and are regularly used by theatre companies looking to add value to performances.

This willingness to receive, by the audience, is essential to a show’s success and Harding suggests that there is no reason why moments of communication can’t include something as simple as a personal request to turn off a mobile phone!

Harding says: “A simple act, like a member of the company asking audiences to check their phones, will not only have the desired effect vis-a-vis the gadget itself, but also make it more likely that the whole audience will be open to enjoy the show.”

Heighten the empathy, create the feeling of captivation and you are well on the way to delivering a moment of transformation: a measure of success for many a production, nay theatre company!

Why do mobile phones have such an important part to play?

Just as the specifically selfish desire for escapism, liminality and transformation, acts as motivation for attending a theatrical performance in the first place, it also make an audience hyper-susceptible to any external stimuli: hence the extreme reactions to a mere rustle of a packet of crisps or the gentle glow of a mobile phone – events that would go un-noticed in most other environments.

It is made worse, in the case of mobile phones because, to many, they represent the very thing that audiences are escaping, by going to the theatre, in the first place.

Are you sitting comfortably? Then we will begin!

By having a member of cast take the time to recognise the issue and join with the audience in their unspoken desire to become  held captive by the production, the company are acknowledging the contract that the audience signed when they bought the tickets.

It can be the first and most important collaborative act of the evening: it is the 21st century version of Listen With Mother’s “Are you sitting comfortably? Then I’ll begin!”

Delivered personally, it signals a significant moment of unity and the imminence of a shared experience.

‘Dial it in’ with a pre-recorded announcement and what does that say about the rest of the performance?

Data from the recent Theatre Breaks survey highlights the importance of the role of the theatres and its staff in delivering an enjoyable theatre visit.