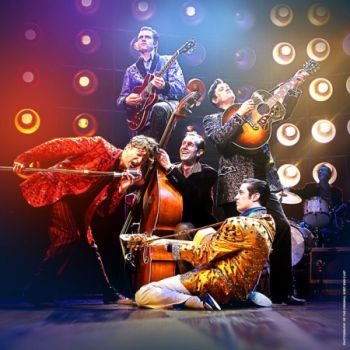 Inspired by the actual event, that took place on 4 December 1956 at Sun Records in Memphis, we are introduced to the “quartet” which included Jerry Lee Lewis, Carl Perkins, Johnny Cash and Elvis “The Pelvis” Presley.

The audience first meets “young upstart” Jerry Lee Lewis who comes across, as always, as mad as a hatter. Likeable, funny, eccentric… Next up is Carl Perkins, who is, in total contrast to Jerry Lee, the old pro. Did you klnow that Perkins actually wrote “Blue Suede Shoes” and, in fact, had a bigger hit with it than Elvis Presley?  In to the mix comes Johnny Cash and the afore-mentioned Mr Presley with his obligatory “squeeze”, who later on does a sultry rendition of ‘Fever’, to complete the Million Dollar Quartet.

This must see show features over 20 classic hits from a golden era of music including: Blue Suede Shoes, Folsom Prison Blues, Fever, Memories Are Made Of This, That’s All Right, Down By The Riverside, Sixteen Tons, (There Will Be) Peace In The Valley, I Walk The Line, I Hear You Knocking, Great Balls Off Fire, Hound Dog, Riders In The Sky, See You Later Alligator and Whole Lotta Shakin’ Goin’ On.