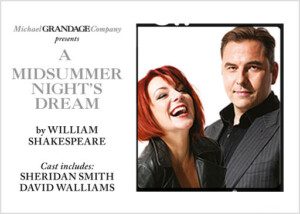 For me Midsummer Night’s Dream starring Sherridan Smith and David Walliams is probably the highlight of a theatrical season that promises to deliver big on stars, big on glamour, big on drama,  but most importantly, small on price: hopefully making any one of the plays a dramatic and entertaining highlight to a London Theatre Break.

This West End Season will follow the principles that Grandage used to such good effect at the Donmar: a mix of classical work with a little new writing but both made as accessible as possible – both in the production itself, in the casting and, most importantly, the cost with 200 seats a show being sold at just £10 each.

Of course some of you will sneer at my choice of favourite and this season is so popularist that most productions will appeal to most people no matter what your dramatic tastes are.

Multi-surnamed Simon Russell-Beale opens the season in a revival of Peter Nichols’ comedy Privates On Parade, playing the cross-dressing Captain Terri Dennis in the tale of an armed forces Song and Dance Unit in South East Asia.

Dame Judy Dench and Ben Whishaw will star in Peter And Alice, a new play by John Logan which explores a meeting between the real life inspirations for Alice In Wonderland and Peter Pan.

Harry Potter star Daniel Radcliffe returns to the London stage in Martin McDonagh’s dark comedy The Cripple Of Inishmaan  the tale of a young man desperate to break away from the tedium of daily life, who hears about a Hollywood film being made on a neighbouring Irish island.

Jude Law completes the list of stars and gets to do a bit of serious Shakespeare with Henry V before the afore mentioned Smith and Walliams end the season with a bang and a laugh as Titania and Bottom!

Speaking about the season, Artistic Director Grandage, commented: “We are delighted to announce the inaugural season of work for the Michael Grandage Company – a programme comprised of new writing alongside the classical and 20th century repertoire. At its heart is a commitment to reach out to as wide an audience as possible with over 200 tickets for each performance at £10 and through our schools’ and access work we aim to appeal to new theatregoers and help build audiences for the future. This unique West End season brings together writers, actors and other artists in a single venture over 15 months dedicated to presenting work of the highest quality at affordable prices.”

Although Grandage will direct all five productions, the season will offer opportunities for young directors and designers to become involved as associates.

The Michael Grandage season runs at the Noël Coward theatre from December 2012 until February 2014.

We are still waiting to hear what seats we get: whether they will be the £10 bargains or our more usual standard of seats but if you are interested, please drop us a line and we will either tailor make your break for you or keep you in touch with when we can book your theatre break.

The Noel Coward Theatre is near Leicester Square so handy hotels are: