Home > Archive > Merrily We Roll Along

The Chocolate Menier Factory’s sell-out production of Stephen Sondheim’s Merrily We Roll Along, directed by Maria Friedman, was a highlight of the Harold Pinter Theatre’s season in 2013. 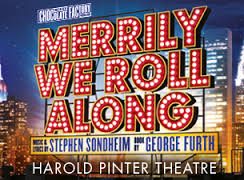 Following its hugely successful run, this new production of Merrily We Roll Along received rave reviews from critics and was the winner of the Critics’ Circle Best Musical award last year.

Merrily We Roll Along in London

The story of Merrily We Roll Along is the story of the turbulent relationship between three friends: Franklin, Mary and Charley. Sondheim actually starts the show at the end of the story, but with each new scene he fills in the gaps, the history and the development of the characters until we find out what bought them to the place in time at which the story starts. This fascinating story-telling technique heightens the audience’s feeling of powerlessness to prevent what they already know will happen to the three friends, yet intrigued to find out what happens to get them to the heart-breaking conclusion.

Songs you may know include Good Thing Going, Not a Day Goes By and Old Friends.

MWRA is the directorial debut of Olivier Award-winning actress, Maria Friedman. And the cast you will know too… with West End stalwarts from Damian Humbley (Little Shop of Horrors) and Jenna Russell (Guys and Dolls) and youngest member of a musical dynasty, Zizi Strallen (Rock Of Ages).

‘It is, make no mistake, one of the great musical productions of this or any era.’ The Independent  *****

‘The show is a rare combination of the thoughtful and the thrilling. Go.’ The Independent *****

‘A seamless revival by Maria Friedman’ The Times*****

‘A superb production by Maria Friedman’ The Guardian *****

‘Musical theatre at its most sophisticated’ Daily Express *****

Merrily We Roll Along Performance Times:

The Harold Pinter Theatre is just off the south east corner of Leicester Square on Panton Street. The nearest tube station is Piccadilly Circus, but Leicester Square tube is not so far away if your hotel is on the Northern Line. Hotels to walk to include the 5 star le meridien and the 4 star Radisson Hampshire Leicester Square. As it is so close to Mayfair there are no good value three star hotels nearby but the Thistle Trafalgar Square might do you. Otherwise head to the St Giles Hotel at the end of Oxford Street or the Travelodge Covent Garden if you don’t want to travel out to Bayswater or Kensington for a bargain hotel… although there are some great deals in that direction if you do.