Home > Archive > Made in Dagenham 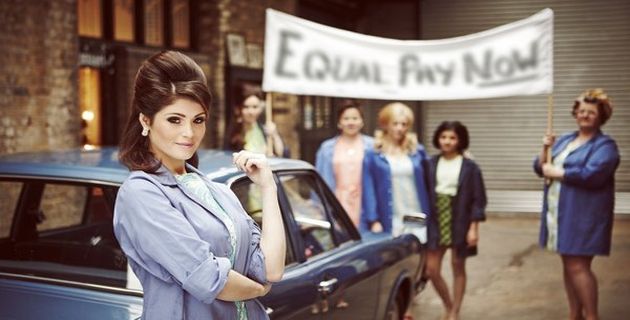 Adapted for the stage by One Man, Two Guvnor’s writer Richard Bean Made in Dagenham is based on the successful 2010 British film of the same name which starred Oscar nominee Sally Hawkins.

Another star of the silver screen, Gemma Arterton (Hansel And Gretel: Witch Hunters, Tamara Drewe, Quantum Of Solace, Byzanthium), stars in the main role at the Adelphi theatre where guests on Made  in Dagenham Theatre Breaks can enjoy the show until 11 April 2015

Essex, 1968 and like millions of other working women, Rita O’Grady (Arterton) rises early, gets her husband up, packs the kids off to school and then heads off to the Ford Motors factory for a full days work.

But when the company announces that the women in the sewing room of the Dagenham car plant are to be regraded to “unskilled” and suffer a pay grade drop into the bargain, Rita leads her friends in a battle against the might of the Ford corporation and the corruption of the Unions.

Their cause inspires a nation and their fight becomes more important than anyone could have imagined and soon Rita has to choose between the fight and the happy home she’s worked so hard to build?

Nearest Hotels: The Strand Palace Hotel, The Kingsway Hall and the Savoy

Made In Dagenham Reviews

I loved the film and whilst this was almost as good it was only almost as good. Super support work from the cast - especially the MPs and the music was good too. Gemma was lovely as Rita. All in all a good night out

Made in Dagenham was great - makes me want to stand up and fight for something!

Les B
by Les B

Seeing Gemma Arteton wa sgreat but the guy playing Harold Wilson stole the show. If MPs these days were like Wilson and Castle I'd actuallt vote for them!