Loserville is a great new musical by  James Bourne, (Busted and Son Of Dork) a sort of  cross between Glee and The Big Bang Theory and is a classic story of an underdog come good.

Check what is now playing at the Garrick Theatre

Michael Dork is a computer geek. He’s invented something that could change the world: EMAIL! 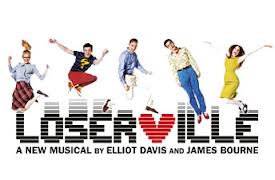 But with his sci-fi obsessed, social-misfit friends he fights to get computers taken seriously in a world of typewriters. Of course it doesn’t help that he has just discovered girls.

When Michael meets Holly – a girl with looks and brains – it looks like all his dreams could be coming true. But the course of true love never ran smooth and when rich kid Eddie, who wants nothing more than a fast ride to the top and doesn’t care who gets trampled along the way, discovers Holly’s dark secret, he tries to ruin Michael’s dreams.

Having opened at the West Yorkshire Playhouse in Leeds it is proving to be a bright and lively show which has got great reactions from audience and critics (yes I know – AMAZING!)

Loserville is booking to 05 January 2013