UPDATE: After a successful first weekend with over 100,000 passengers using London Underground’s Night Service on the Victoria and Central Lines, London mayor, Sadiq Kahn has announced that the Jubilee Line will be the next line to open 24hrs at the weekend with night services set to start on 07 October 2017.

After all the arguments, it is finally happening. London Underground will no longer stop running halfway through the night. Instead it will provide a part service for 24 hours on Friday and Saturday nights.

So if you’ve decided to stay out late after a show you won’t have to depend on expensive taxis, or Shanks’s Pony… having said that, Night Buses have long been a feature of London’s early hours so maybe things won’t change that dramatically. 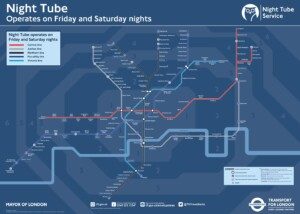 The lines that will open are the Central and Victoria lines followed by the Northern Line (apart from the Mill Hill East and Bank branches), the Jubilee line and the Piccadilly Line (between Cockfosters and Heathrow Terminal 5) later in the autumn

Theatregoers will be well served as this represents all the main lines that go through the West End so, wherever you are staying, you should be able to return to the hotel at almost any time of night… which will give you a chance to get to know the Night Manager.

I wonder if they are all like Tom Hiddleston!