From musical theatre’s most iconic role to an alcoholic, in the seven years that you, or I, would be going through school, is just the first part of Jack Wild’s remarkable story as told by Jack himself in his autobiography, surated by his widow, Claire Harding Wild, “It’s a Dodger’s Life”, finally got published 10 years after his death.

There can be no more honest a foreword than that found in It’s A Dodger’s Life – the autobiography of Jack Wild – star of Oliver and HR PufnStuff:

These are the bits that I’ve remembered
and this is how it all seemed to me!

It is fairly widely agreed that, when one thinks of wild child stars gone wrong, fairly high on anyone’s list would be Jack Wild: A household name at 14, a drunk by 21.

So you will understand that, when that is your story, a lot of what is happening around you does tend to pass you by!

Jack Wild fans (of whom there are still many thousands) and interested readers of It’s A Dodger’s Life will get to hear about his story, from his side. Not necessarily the right side… but certainly how it all seemed to Jack.

But, if what Jack remembers is only half the story, what we think we know about him is also only half the story! Although a lot of Jack’s story is of high times and low times, it is also a story of realisation, recovery and redemption.

My sister, his widow, has worked hard to get his story published and 10 years after his death, It’s A Dodger’s Life is at times an uncomfortably honest telling of what Jack went through, all written in his own unique manner – a manner that made the whole world fall in love with the Artful Dodger from the very first moment we saw him.

The limited edition hardback of It’s A Dodger’s Life is available from Fantom Films. 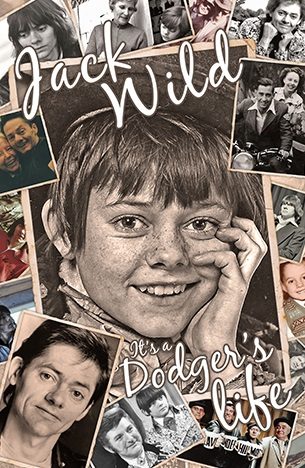