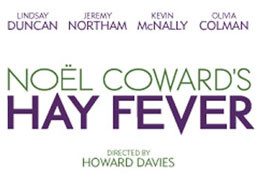 Noël Coward’s comedy Hay Fever has now closed. Click here to find out what is now playing at the Noel Coward Theatre, London.

One of Noël Coward’s most popular plays,  Hay Fever always seems to me like  a cross between Ray Cooney’s Run for Your Wife and Edward Albee’s Who’s Afraid of Virginia Wolf!

The Bliss family, a fairly self obsessed bunch, each invite a guest for the weekend (set, as it is, at a time when one invited guests for the weekend). The four unsuspecting guests get set upon, toyed with, passed around and generally made to feel rather uncomfortable as the Bliss Family play their games.

This comedy of manners results in a weekend of misjudged meetings, secret seductions and scandalous revelations – all very Noël Coward: witty comments and smoking jackets with a little genteel passion thrown in for good measure.

Who is starring in Hay Fever

Lindsay Duncan
Already an award winning actress for “doing” Noel Coward, when she won Olivier and Tony Awards for her performance in Private Lives in 2001, Lindsay Duncan’s most recent TV appearances  include Servilia of the Junii in the HBO/BBC/RAI series Rome, Adelaide Brooke in the Doctor Who special ‘The Waters of Mars’, Margaret Thatcher in Margaret, and Queen Annis in Merlin. Most recently on the silver screen she  played Alice’s mother in Tim Burton’s Alice in Wonderland. She was last in London’s West End with That Face by Polly Stenham.

Jeremy Northam
Best known for his roles as Ivor Novello in the 2001 film Gosford Park, as Dean Martin in the 2002 television movie Martin and Lewis, and as Thomas More in The Tudors, Jeremy Northam was last in London’s West End in Old Times at the Donmar Warehouse Theatre, London, 2004.

Facilities for Hard of Hearing – Yes
Access for Wheelchair Users – Yes
Guide Dogs also Welcome
Theatre Bars: 3 – Stalls: one at the back, one on the way down and one in the Dress Circle
Items for Sale: Ice Cream, confectionery, bar snacks and programmes
Toliets: Foyer: Ladies. Stalls: Ladies and 2 x Gents. Upper Circle: Ladies and Gents. Balcony: Gents.

How to get to the Noel Coward Theatre