GATE, a poignant and witty story of love and loss that asks what really happens to us after we die, what we leave behind and what we will become. will run at the Cockpit Theatre in London from 13 to 24 September 2017.

Following on from the acclaimed success of Pre-drinks/Afterparty at last year’s Edinburgh Festival Fringe, GATE is written by Artemis Fitzalan Howard, co-founder, with Eliot Salt, of Deadpan Theatre. 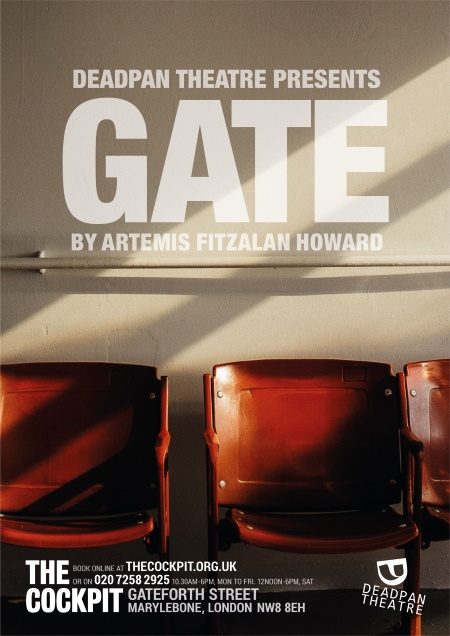 It is an average Thursday morning at ‘The Gate’ in Wapping, East London, and, like every first-born child in her family for generations, Eve is guarding it carefully.  It’s going to be a busy day – there are four new appointments booked in.  The trouble is none of the clients knew they were coming… because nobody knows the gate exists until they reach it, and to reach the gate you have to be dead.

“I mean… I sort of hoped the pearly gates story was true-ish where I could finally have curly hair and be into fitness and classical music and eat Philadelphia toast in the clouds with my other angel pals.  But now I’m here and this is – I’m questioning everything I ever believed in.”

In GATE, Fitzalan Howard challenges the theories of the great ‘thinkers’. Is it true that we only act on narrow material desires or do our wider spiritual beliefs still count for something?

Deadpan Theatre was founded in 2013 and has since produced several sell out shows around the country including Low Tide and musical Get Your Shit Together (which became a Fringe success at the Underbelly in 2015). Deadpan’s latest offering to the Underbelly is a two-part musical called Pre-drinks/Afterparty written by Eliot and Jude Mack, which is currently in development with Avalon Television.