Home > Archive > From Here to Eternity

From Here To Eternity – The Musical 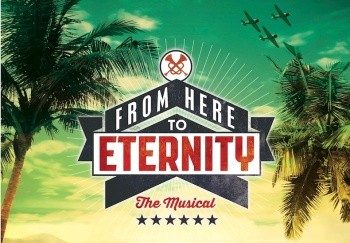 Fans of Tim Rice flocked to the Shaftesbury Theatre after great reviews of his new show, From Here To Eternity, greated the opening night but the show closed on 29 March 2014.

Theatre Breaks for From Here to Eternity are no longer available

The musical is adapted from James Jones’ 1951 novel set on the Hawaiian island of Oahu just before and during the infamous attack on Pearl Harbor in 1941. Back in the day time both the book and 8 time Oscar winning movie were heavily edited by the censors, but with the original novel now being re-released freed from the censor’s pen, both it and musical will show a very different side of the famous story.

A talented cast stars in From Here to Eternity with West End regular Darius Campbell (Gone With Wind & Chicago) taking on the lead role of Sergeant Milt Warden (played by Burt Lancaster in the film); he’s joined by Rebecca Thornhill (last seen in the West End in Mary Poppins) who will play Karen (Deborah Kerr’s role in the film) the wife of Warden’s superior officer with whom he has an illicit affair; ITV2’s Plebs actor Ryan Sampson (who played the dim-witted servant Grumio in the recent hilarious comedy series) will aim to make the part of Private Maggio (played by Oscar winner Frank Sinatra in the film) his own as he supports his friend Private Prewitt played by Robert Lonsdale, who was described by Tim Rice as “a young man with enormous talent”, through court martial proceedings following Prewitt’s refusal to take part in a boxing competition.

Certainly the story is made for the musical genre – with strong sub-plots and intriguing central characters.  Tim Rice’s partners on the project are composer Stuart Brayson and writer Bill Oakes. The team will be hoping to repeat the success of Rice’s previous credtis, which include Joseph and the Amazing Technicolor Dreamcoat, Evita and Jesus Christ Superstar with Andrew Lloyd Webber and Chess, Beauty and the Beast, Disney’s The Lion King and Aida.

From Here To Eternity Theatre Breaks 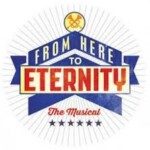 From Here To Eternity Theatre Breaks  at the Shaftesbury Theatre, London with nearby hotels including the 3 star Covent Garden Travelodge and the 4 star deluxe Radisson Edwardian Blu Mercer Street . Another recommendable hotel is the 4 star Red Carnation Montague Hotel which has consistently featured at the top of Tripadvisor charts for its excellent standard of service and presentation.

This beautifully staged new musical by Tim Rice, Here to Eternity, reminds us how musicals should be. With fantastic performances by all the cast who could not only dance and sing, but act as well. The choreography was slick and the songs well written and tuneful. Although the story seemed at times a little drawn out, its dramatic conclusion made it worth the wait. If you're looking for good acting, believable American accents and a love story, look no further.

From Here To Eternity

For me, the biggest plus was the score. The music effortlessly helped to conjure up the period. Even though this was the first time I’d heard these songs there was a familiarity there that made them easy to access. It didn’t feel like this was the first time I’d heard them (and I don’t mean that in a negative way). I also enjoyed the lyrics - I’ve always liked the way Tim Rice uses rhythm and word-play.

I would give this musical a solid four marks out of five. It was entertaining and slickly presented and a thoroughly enjoyable evening out. However, what was missing was the WOW factor - that moment that takes your breath away. Without that it just fell short of being a five out of five.

Me & my friends saw From Here to Eternity last night and we were all really impressed by it. Such a shame the theatre wasn't full because the people who missed out REALLY missed out.

I'd say it was a very modern musical but with a definite 40s slant, There's quite a bit of swearing in it and one gay scene so it's not holding anything back. Tim Rice says that it's a truer version of the original novel & obviously the swearing & gay references were omitted from the 1950s film.

Anyway, back to what we thought of the show. We all gave it a thumbs up. We liked the two parallel story lines of not so straight forward love affairs between the two male leads and their unconventional choice of women.

Speaking of the two male leads - Darius Campbell and Robert Lonsdale - they both had incredibly powerful voices which fully complimented each other in the their duets together. Plus Siubhan Harrison who played disillusioned prostitute Loreen also had terrific vocals.

Another stand-out performance was from Ryam Sampson who plays Private Maggio the clown of the G Company who gave much needed (and very well received) light relief to the traumatic goings on behind him as Pearl Harbor is bombed by the Japanese.

The songs were very Tim Rice with definite hints of Evita and Chess creeping in (that's not a criticism as both are great shows).

Sadly, the critics haven't exactly gone over board in their praise of this show which I think is a real shame because it will probably mean people will be cautious to go to see it, but me and my friends too loved the whole show and I for one would definitely see it again.

So glad you enjoyed it: I saw some 4 star reviews and a couple of "positive" three star reviews, so certainly not a traditional "slamming" by the critics who in general gave a grown-up response to a grown up show.