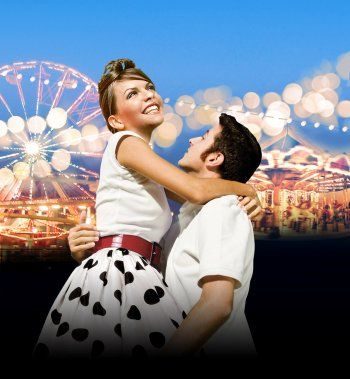 The early 60’s’ was the dreamiest of times! Maybe you remember the dresses, the music, the cars or maybe you’ve just seen your mum and dad, looking impossibly young, smiling out of the back seat of a rather smart car in an old faded photograph.*

Dreamboats and Petticoats has now closed. Check out what is now on at the Wyndham’s Theatre

Whatever your connection, make sure you come and see Dreamboats and Petticoats at the Wyndham’s Theatre, London. With music that will knock your bobby socks off this is the feelgood musical that will rank alongside the great London shows for years to come.

Dreamboats and Petticoats comes from the three hit albums of which over 2 million copies have been sold! The London musical features the music of such greats as Billy Fury, Adam Faith, Joe Brown, Helen Shapiro, Bill Haley, Buddy Holly, Bobby Darin and Chuck Berry.

The story is classic fayre! Young musicians, Norman and Bobby, compete to win a national song writing competition – and, more importantly, the attention of the gorgeous Sue (I wonder if she is a bit of a run-around!)! But when Bobby discovers that shy Laura is no slouch on the piano, love and rock ‘n’ roll fame beckons (I wonder if he tell’s Laura he loves her? I bet he asks someone else to!).

Book Dreamboats and Petticoats Tickets Only – Save up to 60%

* I fall into the second category – honest!

Make the break complete and come down to London by train by adding rail travel to your London Theatre Break.

It's impossible not to like Dreamboats and Petticoats. With over forty toe tapping hits from the fifties and sixties, it is guaranteed to have you bopping in your seat.

It's rather like being at a party, which starts a little hesitantly until all the guests have arrived, and then it's relentless enthusiasm will either leave you exhausted, or begging for more.

The young cast have energy in bucket-loads and deliver on every level.

This show is groovy baby.

It made me want to go back to the days when you wore petticoats and a damn good bra ...when going the the Wimpey was a treat and romance was done properly back then

Dreamboats and Petticoats is an imaginative bumper kart ride through the songs and sounds of the 50s.

Packed with your favourite summer love songs from the great era of Rock and Roll, theres little wrong with the show, despite a weak story line, the show is funny, upbeat and has you up on your feet by the end, everybody was dancing in the aisles.

Overall an enjoyable show, with a stereotypical story and crammed for of 50s classics, pop on your petticoats and board the dreamboat!