The Young Vic Theatre’s production of Henrik Ibsen’s timeless classic, A Doll’s House, transferred to The Duke of York’s Theatre for a 12 week period from the end of September. 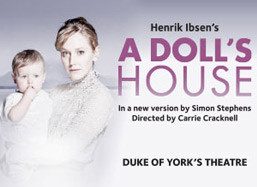 A Doll’s House Theatre Breaks are no longer available

A Doll’s House is about a young woman, Nora (played by Hattie Morahan), who breaks free from her marriage and tries to break free from the strict 19th century world that surrounds her in a bid to discover her true identity and “find herself”

Pushing the boundaries of what women could and should do in the late 1800’s, A Doll’s House sees main protagonist, Nora face many struggles in the fight to find her true place in the world.

Thursday and Saturday at 14:30pm

A Doll’s House and Hotel Accommodation

A Doll’s House Theatre Breaks includes tickets with hotel accommodation. You can choose whether you would like to stay for one or more nights and you can also add rail travel and entry to many of London’s top visitor attractions.

The Duke of York’s Theatre is close to Leicester Square Tube Station on the Piccadilly and Northern Lines.

If you would like to stay at a hotel within walking distance the, Guoman Charing Cross, The Strand Palace and the Radisson Edwardian Mercer Street are all close by.  For a cheaper theatre break look on the list of available hotels for  the several Travelodges in central London, especially the Travelodge Covent Garden which many may remember as the Drury Lane Moat House which used to be a very popular base for a theatre break.