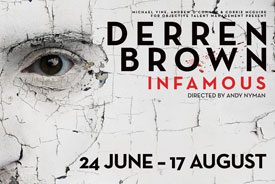 Derren Brown is quoted as saying: “I enjoy the stage shows more than anything else. Live on stage is the best place for what I do: it’s unpredictable, and the audience knows there is no possibility of judicious editing“.

It was at the Palace Theatre on Shaftesbury Avenue and was excellent. The acknowledged master of psychological illusion once again mesmerised, shocked and entertained the audience.

We are probably all used to his performances on TV. But not many of us will have seen his live shows. Imagine just being there in the audience when he performs some of his most inexplicable tricks? Stunts? Illusions? What are they?  On stage as well as on television Derren is in a class of his own, exhilarating audiences with his unique performances. For over twelve years he has created moments of magic both on screen and on stage that have truly amazed his audiences, debunked the paranormal, won copious awards and encouraged many to improve and enhance their own mental abilities.

Derren’s first show, Mind Control, was way back in 2000. That was followed by Trick of the Mind, Trick or Treat and a series of one-off specials including the controversial Russian Roulette, the hugely popular Events, Hero at 30,000 Feet and the more recent Derren Brown: The Experiments, which won the 2012 BAFTA award for Best Entertainment Show.

Important: Infamous is not suitable for audiences under 12 years old.

We have theatre breaks for Derren Brown’s Infamous with tickets for the show at the Palace Theatre and overnight hotel accommodation for performances from 01 July 2013 to 17 August 2013.

Nearby hotels include the 3 star St Giles Hotel and the deluxe 4 star Radisson Blu Edwardian Mercer Street Hotel just on Seven Dials. The closest tube station to The Palace Theatre is Leicester Square on the Piccadilly and Northern Lines, giving you easy access to hotels all over London (and the railway stations of Charing Cross, Waterloo, Euston, Kings Cross and St Pancras: convenient if you are coming to London by train.

We hope you enjoy your theatre break to London!