Fans of award winning comedy shows The IT Crowd and The League of Gentlemen were in 7th heaven with Terry Johnson’s hilarious play Dead Funny at the Vaudeville theatre starring Katherine Parkinson and Steve Pemberton along with The Royal Family’s Ralf Little. 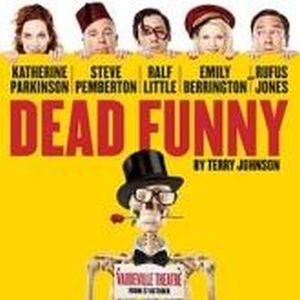 While Eleanor wants a child, her partner Richard is just too busy to oblige.

In the week when British comedy heroes Frankie Howerd and Benny Hill both kick the bucket, the Dead Funny Society gather for a celebration which promises to be full of hilarity and laughter. Hosted by Richard with his disgruntled wife looking on – her painted on grin masking a grimace. It’s hard to see the funny side of things when your marriage is deader than both Morecambe and Wise.

Returning to the West End for a strictly limited season, Dead Funny producer Nica Burns said “A revival of this wonderful play is long overdue. Like life, it’s as funny as it is moving and needs an outstandingly talented cast. So for the 21st anniversary production, here they are…”

Wander towards Holborn and the 4 star Kingsway Hall on Great Queen Street is a cut above the rest and one of Theatre Breaks favourite hotels.

If you don’t want to stay nearby you can catch the underground form nearby Covent Garden and Charing Cross tube stations. You can walk across the Thames where hotels, on the south side of the river, are a bit cheaper. Take a moment to enjoy the beautiful views up and down the Thames as you cross it – especially breathtaking when it’s all lit up at night!