Dawn French – 30 Million Minutes is no longer available to book.
See what’s on next at the Vaudeville theatre

Much loved British comedienne, Dawn French (Vicar of Dibly, French & Saunders), returns with her one woman show at the Vaudeville theatre in late Autumn. 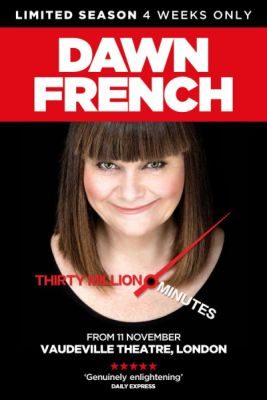 The title of the show – 30 Million Minutes – refers to the exact amount of time she has been alive and focuses on her life and career – including her recent weight loss – through a variety of sketches and anecdotes.

With hilarious comic timing and a great eye for detail, French shares the secrets of how she has coped with womanhood, fame and her body image throughout her fascinating life. Topics of discussion include her extraordinary lack of willpower, her lifelong nosey streak and her tendency to show off; all under the watchful gaze of the public.

The actress & novelist’s humorous stories will definitely entertain in this new and unique show, so don’t miss out on your chance to laugh out loud with Dawn French this November for 4 weeks only!.

The Vaudeville Theatre on the Strand has two favourite Theatre Break hotels very close by: the 4 star Strand Palace Hotel and the lovely 4 star deluxe Guoman Charing Cross. Just round the corner there is also the ultra trendy 5 star ME London hotel with its uniquely named rooms and its cool bars and restaurants.