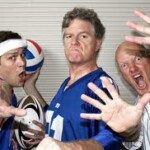 In this Olympic year, the London Theatre Breaks team is over-joyed to have so much theatre to write about. And it is great to be able to welcome back to London the Reduced Shakespeare team for two months of frivolity at the Arts Theatre, London.

The Complete… has closed
But wait! The Complete World of Sports (abridged)? (Book here!) More Sports? AAAGH!  But fortunately, in this merciless but affectionate satire, The Reduced Shakespeare Company sets its comic sights on the lunacy of sports.  The result is a tour-de-farce of vaudevillian physical comedy that will delight every non-sports fan in the family.

Following a highly successful run in New York and a sell-out US tour of The Complete World of Sports (Abridged) the West End premiere, at the Arts Theatre features the entire history of athletic competition revisited in a marathon of madness and mayhem seeing the world’s great sporting events shrunk down to theatrical size.

Among the many questions answered: Is darts really a sport? What does NASCAR stand for? Why do Americans insist on calling a contest in which only they compete the “World Series”? What about wife carrying, extreme ironing and bog snorkelling? Which is more boring  baseball or cricket? Who invented curling and synchronised swimming  and why are they in the Olympics?

Whether it’s the ancient cavemen or the Classical Greeks, the Romans, the Elizabethans or the modern sports media, The Complete World of Sports (Abridged) brings you all the emotion, the drama and the scandal of the world of sports.

The Complete World of Sports (abridged) is an audience-interactive, family-friendly show for all ages. If you are a fan of their theatrical offerings then you will recognise their blend of “slapstick, sight gags, hernia-inducing puns, and genuine verbal wit.” (Boston Globe).

As one critic wrote, “I hate sports, but I couldn’t stop laughing from the moment the RSC took the stage!”

So Get Ready! Get Set! LET THE GAMES BEGIN!

Nearby Hotels for Theatre Breaks

Sandwiched between Leicester Square and Covent Garden the Arts Theatre is right in the middle of the West End.  So if you can book a hotel nearby then you will a really super Theatre Break.  The problem with the run of the Complete World of Sport is that it is slap bang in the middle tof the Olympics so getting a hotel room will be a bit of a a problem.. at any price!  Normally I would recommend the trio of Radisson Hotels – the 5 star Hampshire and the 4 star Mercer Street and Leicester Square Hotels but what is the point?

Book Tickets for The Complete World of Sport (abridged)

To add to the “Oh Why can’t I get away from sport this year” feeling, as part of the Spring Season at the Hampstead Theatre, in north London they are doing a world premiere of Chariots of Fire from 9 May to 16 June 2012. Our cups runneth over!