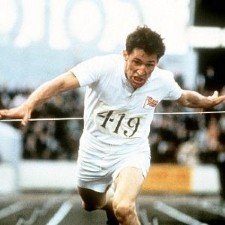 First it was announced that the Reduced Shakespeare Company were to bring the Complete World of Sport abridged to London, now it is Chariots of Fire which has taken the Olympic theme to the Gielgud Theatre, London

Chariots of Fire has now closed. See what is now on at the Gielgud Theatre

Chariots of Fire is a true story but  most people actually remember the film starring Nigel Havers and that music by Vangelis rather than the heroics of 90 odd years ago!

Edward Hall’s production of Chariots of Fire is set to bring the Olympic spirit to theatreland and the West End this summer. It is set during the Paris Olympics Games of 1924 and follows two track athletes Eric Liddell, a committed Scottish Christian and Harold Abrahams, an English Jew, as circumstances beyond their control add controversy to the race as they find themselves not just competing against each other – in their bids to become the fastest sprinters and win Olympic gold.

Award-winning playwright Mike Bartlett‘s new adaptation was inspired by Colin Welland‘s original screenplay and the play will even feature that music.

Jack Lowden, who last year starred as the lead character, Cammy, in the National Theatre of Scotland’s production of the Olivier Award-winning play Black Watch, plays Liddell while James McArdle takes the role of Abrahams. Most recently McArdle starred in the RSC’s The Heart of Robin Hood which entertained Theatre Breaks theatregoers in Stratford Upon Avon

Chariots of Fire and hotel packages

So if you don’t want to have to emulate Liddell and Abrahams on the long track back to your hotel set the Distance Filter to low and see what you comes up for your chosen dates.  Obviously you are best off going to see it before the Olympics so that you don’t have to share the auditorium with sweaty atheletes on a break between first and second rounds of Turkish Wrestling or what ever they get up to in the Olympic Park.