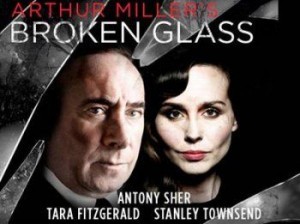 Broken Glass at the Vaudeville Theatre

Broken Glass moves from the Tricycle to the Vaudeville

My next door neighbour saw  Broken Glass at the Tricycle and said it was brilliant – and he sees even more theatre than me!

Following its record breaking run at the Tricycle theatre Broken Glass transferred to the Vaudeville Theatre earlier this month and runs to Saturday 10 December. Written by Arthur Miller, Broken Glass won the Laurence Olivier Award for Play of the Year in 1995.

While Philip is obsessed by his work, and trying to escape his own Jewish heritage, he has little time for his wife, but when Sylvia becomes partially paralysed after reading about the events of Kristallnacht in the paper something must be done. Philip brings in Dr. Harry Hyman to help get to the root of Sylvia’s problems, diagnosed with hysterical paralysis her symptoms are psychosomatic but the Dr pursues with his treatment. As the Dr comes closer to finding the source of Sylvias troubles, it is revealed that there are problems in the couple’s relationship, problems that could have disturbing consequences for the family.

Broken Glass is on at the Vaudeville Theatre on the Strand.  Hotels nearby include the Strand Palace Hotel, The Guoman Charing Cross and the newly re-opened Savoy Hotel – if you are feeling flush! Look out for those hotels when you book your Broken Glass break.