My old science teacher, to the mild bemusement of her class of 13 year olds, declared that sex with a condom is like eating a toffee with its wrapper on (this was the 70’s). This summer I think we have all discovered what she then knew: like sex and toffees, watching theatre through the medium of YouTube is a sanitised, safe and flavourless affair.

So it was good, good, good, after six months of anticipation, to finally take the wrapper off last night at Stephens House and Gardens in Finchley to see Charles Ward’s Renaissance. 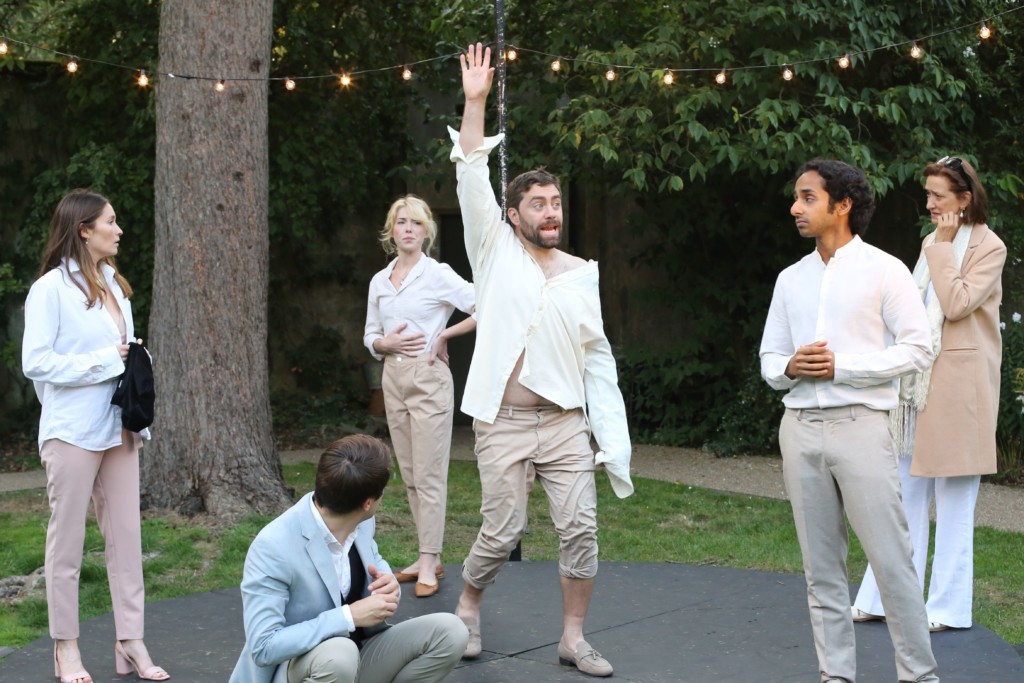 Like the bubbles we are all living in, the events that take place in Renaissance share very little with the actual outside world of 16th century Europe it is set in, but it is very enjoyable and I can’t help feeling a little honoured to be sitting in such intimate (yet suitably distanced) surroundings, being entertained by such a super cast and looked after by such lovely front of house staff.

Somewhere in between besieging Naples, storming Capua, capturing Urbino and Camerino and planning the downfall of Bologna, ex cardinal, Condottieri and bastard son of Pope Alexander VI, Cesare Borgia, has “a moment” and decides to become a painter. So just for a laugh, he hands his power to Niccolo Machiaveli, who, always up for a challenge, accepts.

When Machiavelli turns out to be rubbish at the role, Leonardo de Vinci (who is never up for a laugh and is finding painting and inventing stuff a bit too financially challenging) decides to become a politician in his place.

But Cesare’s sister, Lucretia (who is also always up for a laugh) turns up at court dressed as a French boy to see if anyone recognises her and sees through her brother’s jolly japes immediately.

Throw into the mix the brilliant and beguiling Caterina Sforza, in court to stop Borgia taking over neighbouring Forli and a random art collector (played by the calm, cool and collected Haydn Gwynne), who both commission the disguised Cesare to paint their portraits, and you have the  perfect play to reconnect cast with audience post lockdown.

The Autumn garden where we are gathered in scattered chairs is simply bedecked with strings of garden lights hung over a small circular stage onto which our troupe of actors parade to tell their story.

Gentle direction by Emma Butler makes us forget all about social distancing, whilst still adhering to the rules, and by the end, even a stolen kiss  seems natural under the circumstances.

James Corrigan as Borgia, is tasked to bring the energy to the production and obviously relishes his time back on stage.  A very young Da Vinci, quietly played by Akshay Sharan, and Nicholas Limm’ Machiavelli are swept up in his plans to duck out of political life, until they themselves start to find the freedom in their new-found roles.

Although the premise of the play is based on the presence of the three male protagonists under one roof, it is the ladies who bring the needed friction to the piece. Bethan Cullinane’s Caterina Sforza is part Rosalind and part Mrs Chicky: railing against the masculine nature of the world, she is more than a match for Borgia’s old school ideas, whilst Hannah Morrish wilfully casts off her girlish weeds to achieve the freedom she desires as Cesare’s sister, Lucrezia.

Renaissance is not only about about re-invention and freedom but also about responsibility. It is odd that we have to think more about a night at the theatre before we head out rather than on the way home, but I fear that will be the way of things for a while.

However long Renaissance‘s bubble lasts, as it floats away on the evening air, it will bring delight to all who see it.