Come From Away is the true story of how 7000 passengers were diverted to a small town in Newfoundland when, in the aftermath of the 9/11 attrocity American airspace was closed. It is the story of how two worlds came together. How new friendships helped two communities cope with adversity and loss.

Probably the best musical to come to London in years… and that includes Hamilton!

What is Come From Away about

On the moring of 11 September 2001 the world woke up as normal and in a small Newfoundland town called Gander, the 9000 occupants went about their business as normal.

Then two things happened. Firstly, those listening to the radio or watching the TV started to hear the news reports of a terrible event over 1400 miles away in New York and then almost immediately planes started arriving at the town airport. Within a couple of hours over 7000 passengers landed.

Come From Away is the story of how the townsfolk threw open their doors and welcomed people from all over the world.

Their infinite genourosity became legendary and this musical just a small way of marking, during times of terrible horror, how remarkably kind human beings can be.

What makes Come From Away so good?

Of course a good story doesn’t necessarily make a for a good musical (did anyone ever see Whinnie?). But what does make for a good musical is great music, super singers and actors, sympathetic direction, a simple but effective set, 100 minutes and no interval! 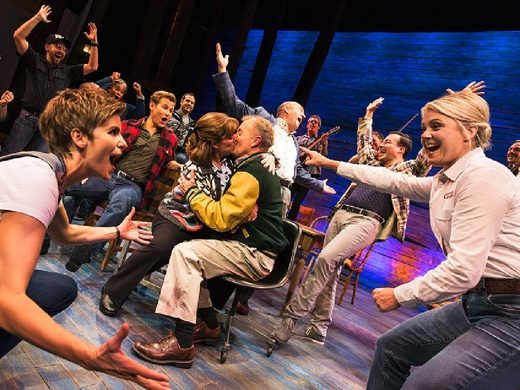 So first mention must go to the husband and wife team of David Hein and Irene Sankoff (lyrics, music, book and all). They created the show or, in Irene’s words, “curated” the show. They took stories from thousands of interviews of townsfolk and travellers alike. Hein and Sonkoff then succesfully compressed this massive story down to 100 minutes of compelling theatre.

The music is representitive of the music the writers grew up listing to a mixture of folk and rock with strong Celtic influences. For me, it is the music that I wish had been written for Once.  At times plaintive at others exhuberent, but always accessible. The small band (guitar, bass, fiddle, flute, keyboard, accordian, percussion, drums and ugly stick) is scored to deal just as effectively with the big musical themes as it is with the diddly diddly of raucus pub music that celtic communities across the world will recognise and love.

The band get little rest. The play is almost completely through scored. This means that the musical never suffers from the jolt into a song that some musicals suffer from.

This is the show that, one day, people are going to ask you whether you saw it. Make sure you can say “yes”! Book Come From Away Theatre Breaks

Who will enjoy Come From Away?

I have already recommended this to my 80 year old mum and my 13 year old daughter, the guy I play tennis with and all my friends on Facebook!

Apart from being a great story it is also a great piece of theatre. It had the audience rapt from the first beat of the first bar of the first scene.

Going to See Come From Away

I can recommend getting there early and having a meal downstairs at the Phoenix Artist Club under the theatre. If you can’t get there early enough the show is only 100 minutes long so you can sit down for a post theatre meal by 9:15!

The whole of Soho is across the road with more restaurants than you can shake an ugly stick at! Don’t know what an ugly stick is? See the show, you will then!

Come From Away and Hotels

The nearby 3 star hotel of note is the St Giles Hotel just behind the Dominion Theatre. It has a pool and an extensive gym and a couple of its own restaurants and is a perfect base for Come From Away Theatre Breaks.

Move upmarket and stay at the 4 star Radisson Edwardian Mercer Street Hotel just toward Covent Garden. It’s just opposite the Cambridge Theatre (where Matilda is on). Very plush!

If you don’t want to stay in Theatreland you can get the tube to pretty much anywhere from Leicester Square or Tottenham Court Road.