Only Fools and Horses Theatre Breaks 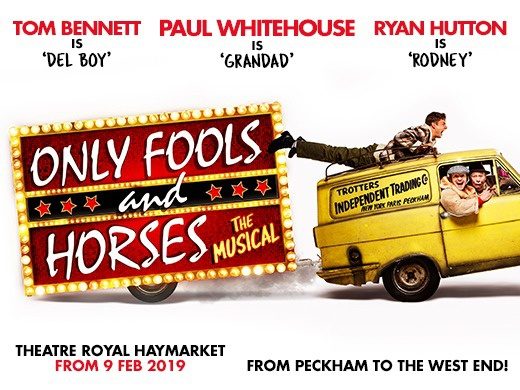 About Only Fools and Horses

There is not a lot to be added to what has been said about  this much loved TV comedy series. So fans will be over-soyed to hear that comedy legend Paul Whitehouse has teamed up with Jim Sullivan, the son of the orginal writer of the TV series, John, with musical contributions from Chas n Dave, to write and produce a script and score to honour the comic legacy of this British institution with a home-grown British Musical spectacular.

Whitehouse takes centre stage as Grandad, uniting with Tom Bennett (Del Boy) and Ryan Hutton (Rodney) in this unique showstopper. Featuring cherished material from the TV series, with all the laughs, dodgy dealings and unforgettable moments to boot.

Take a drive down memory lane with us, to reacquaint yourselves with Britain’s most loveable rogues, and experience the classic comedy brought to life once again through an ingenious and hilarious original score; an idea so inexplicably pukka, it surely proves the old adage that he who dares wins!

Featuring your favourite characters, the beloved theme tune and an array of comic songs full of character and charm, audiences will enjoy a right old knees-up with Only Fools and Horses the Musical.

Only Fools and Horses the Musical Show Times