Firstly I have to say that I have not seen a more engaging production of Hair. Taking it back to the grottos and allies and away from the proscenium arches of most modern productions, just works better. It allows the performers to more easily draw the audience without having to try too hard. I wish more musicals were done like this – many suffer too much from the money man’s desire to sell as many tickets as possible and park them in auditoriums that are too big for them. 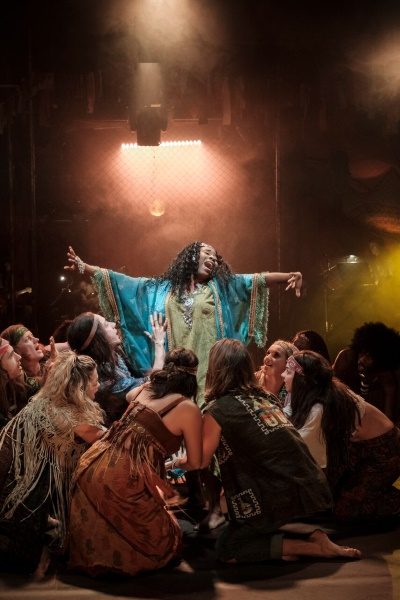 Of course there is still merchandising in the foyer! Phrases like “to context the show’s time frame” in the programme and Donald Trump in the opening sound montage damage the thin veneer of 1960’s Greenwich Village but, all-in-all this is a un-selfconscious production and it benefits from that.

Most of the cast of Hair will not have met an actual live hippy – unless they really did their research – but scratch the surface and you realise that this disenfranchised group of beautiful people is not particularly different to any other disenfranchised group – now or then and it is this that enables the production to be more relevant rather than the evoking of the T word! 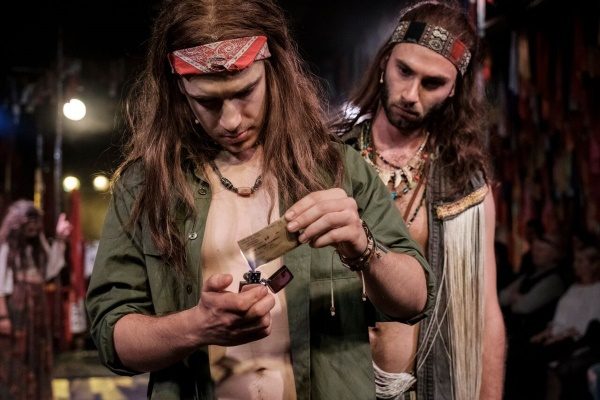 Unfortunately, the show uses out-of-wedlock pregnancies, inter-racial relations, nudity, talking about sex and giving young people a voice, to shock its audience and today’s more liberal attitude to all of the above rather neuters this rather moth-eaten tiger, so it comes over as just a bit of old hippy fluff. This once angry generation is now captured and caged for curious visitors to the zoo of life – and it doesn’t look like they put up much of a fight. 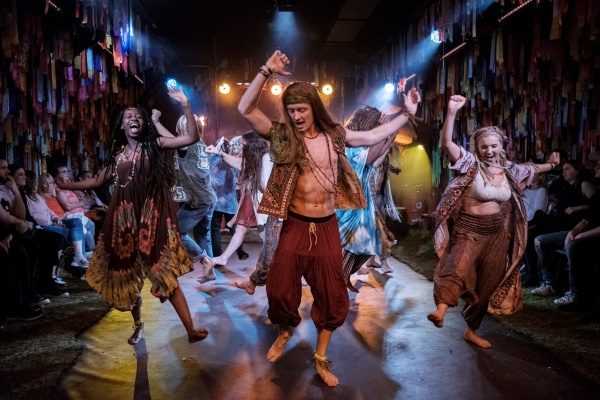 That is not to say that it is not worth a visit. If I was in the business of giving stars I would give it a very creditable 4. Partly to persuade those who think they may not like it to go and see something I am sure they will enjoy, but mostly for the creditable performances of the young ensemble cast. 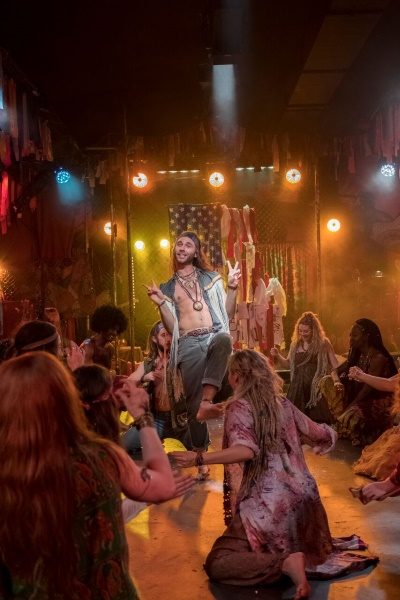 Whether they are playing their own role or one of a myriad of characters that encounter the group, there is an honesty (there is that word again) that cannot fail to appeal.

Robert Metson (Claude) has the luxury of having one of the most 3D characters straight from the book and takes advantage with a thoughtful and well-judged performance. The same can be said of Laura Johnson, with a bitey Sheila that cuts through the hippy melange. Berger (played with fun and enthusiasm by Andy Coxon) is the totem pole around which everyone gathers – you can see why – he is perky and good looking and doesn’t mind getting his totem pole out but, unlike with Claude and Sheila, the book does little to help Coxon deliver a performance of much depth. 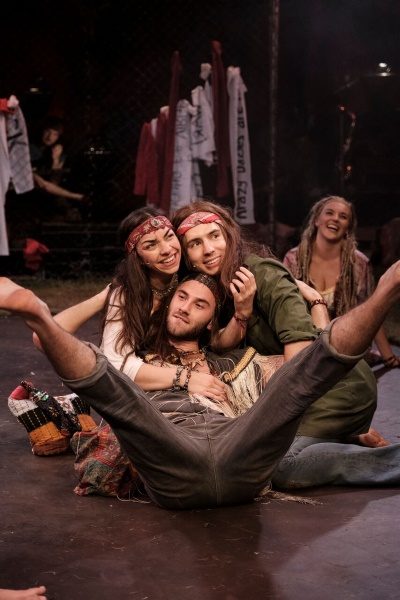 It is in the music that the sun shines through. The voices and the arrangement combine perfectly to make for an aural feast as satisfying as the sound of the 60’s that the original score was part of.

The tightness of the spine of the band of (Tom Hutchinson, drums and Andrew Richards, Bass) and  the arrangement itself (by MD Gareth Bretherton) offers an authentic sound and a lot of joy that steers away from some of the pomp of the original. The small band also benefits greatly from some  lovely additional instrumentation from the cast – giving it an extra lift. I also appreciated that the orchestra pit itself (set at the back of the stage) looks like my mates bedroom used to?

So congrats to director Jonathan O’Boyle and designer Maeve Black for creating a vibe that you can enjoy whether there is a Kaftan hiding in your wardrobe or your parent’s.

If you are asking, I’d say “go” but don’t expect to be shocked, just entertained and, in a world that lacks so much love, peace and understanding and suffers from so much greed and selfishness, that’s just what we need: a few moments to stick our heads in the sand!