Here at Theatre Breaks we never forget the other highlights that London’s West End offers beyond its theatre. The restaurants, the shopping, the museums and art galleries! Last week we treated our art correspondent to a day at the National Gallery for the opening of a major new exhibition, Courtauld Impressionist – from Manet to Cézanne, which runs to January 2019.

From chilly days in Galashiels, studying art, the visual treats of Impressionism and Post-impressionism, “two of the most important movements in art history”  have served to keep Bridget Strachan warm. A new exhibition at the National Gallery re-unites her with her old college chums!

In a significant exhibition, covering two of the most important movements in the history of art – Impressionism and Post-impressionism  – the radical modernity of modern French painters from 1860 to the turn of the 20th century is on display with an impressive number of some of the most iconic, well-loved and instantly recognisable masterpieces, thanks to the merging of the collections from the Courtauld Gallery together with the National Gallery’s own paintings. Hats off to Samuel Courtauld who financed both; art lovers in this country owe him a great deal of thanks! 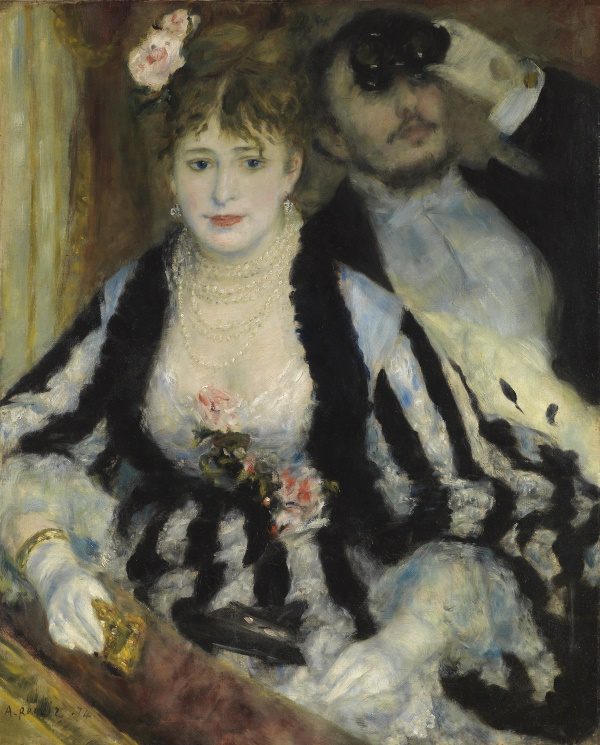 Laid out chronologically, artist by artist, the first eye popper is Manet’s ‘Music in the Tuileries Gardens’
his first major, influential painting of Parisian life. Hated by the critics and bemusing the public at the time, with shockingly loose, blurry, immediate brush strokes this heralds the beginnings of a revolutionary style of painting about to develop. His monumental masterpieces ‘Dejeuner sur L’herbe’, which caused a sensation and ‘Bar at the Folies Bergeres’, one of the most complex and important paintings are also on show. All three are breathtaking.

As well as all the scenes of Parisian night life the other major theme of the Impressionists (and perhaps
the most typically associated with them) are the paintings ‘en plein air’. The broken up, fast, flickering brushstrokes and bright colourful palettes evoke the shifting patterns and reflections of the changing light – the thing we probably associate most with this style of painting.

Seurat moves things on with his radically modern ‘Bathers at Asnieres’, monolithic in scale in comparison to the rest, a powerful painting of industrial workers on the banks of the Seine. As well as his very technical pointillism, modern geometric lines dominate in ‘Bridge at Courbevoie’, tantalisingly modern and minimal. Gaugin is there.  One single Van Gogh is another highlight and there is a smattering of the exquisite and subtle paintings of Pissaro and Bonnard.

Undoubtedly though the finale is grand- Finishing up with Cézanne, another real heavyweight and pivotal in the history of art – ‘The Card Players’ among several of his visionary works is here.

Walking around Courtauld Impressionists you really can appreciate the first tremors of the earthquake that was about to hit the art world. The clues are all on show as Cezanne starts to play with the traditional rules of composition, perspective and form. In a technique he called ‘constructive’, expressing form using colour and simplified geometric shapes, he points the way to the future modern art movements of the twentieth century, towards the cubism of Braque and Picasso and all the deconstruction that is to follow.

COURTAULD IMPRESSIONISTS: FROM MANET TO CEZANNE

In a note accompanying the above article Strachan sent her apologies: “I start to get a bit serious” she admits “I get very passionate about contextualising the impressionists though – it’s major, major stuff!”.

I guess many of us wandering the art galleries of London will never appreciate what is hanging on the walls in the context of the wider world of Art, but what the National Gallery consistantly succeeds in doing is giving anyone who visits London a chance to gaze on history in the painting: whether we see the compsoition and form of a piece or just the picture on nan’s table mats.

Talking of table mats, Edwin Landseer’s Monarch of the Glen is a little freebie thrown in to Room One of the National Gallery – you can see it courtesy of National Galleries of Scotland until February 209