Come to London to see the gripping story of how one couple brought about secret meetings between State of Israel and the Palestine Liberation Organisation that led to the signing of the Oslo Accord in 1993. Oslo Theatre Breaks are no longer available. 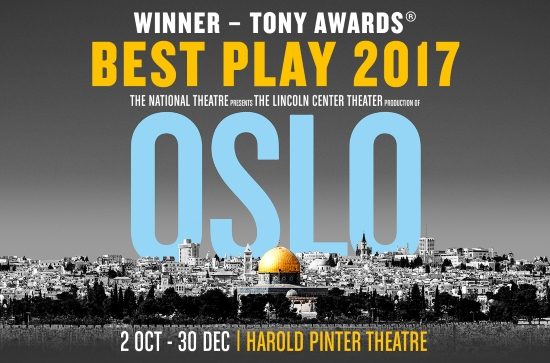 The National Theatre presents New York’s Lincoln Centre Theatrer’s production of OSLO. OSLO won the 2017 Tony for Best New Play and tells the true story of how one young couple, Norwegian diplomat Mona Juul and her husband, social scientist Terje Rød-Larsen planned and orchestrated top-secret, high-level meetings between the State of Israel and the Palestine Liberation Organisation, which culminated in the signing of the historic 1993 Oslo Accords.

Featuring dozens of characters and set in locations across the globe, OSLO is both a political thriller and the personal story of a small band of women and men struggling together – and fighting each other – as they seek to change the world.
Toby Stephens (Black Sails, BBC’s Jane Eyre, Private Lives) plays Terje Rød-Larsen whilst the Tony-nominated actress Lydia Leonard plays Mona Juul. Oslo also stars Peter Polycarpou.
Mona Juul is currently the Norwegian Ambassador to the UK – the first woman to occupy the role.
Oslo is currently the biggest grossing play on Braodway (July 2017).

Oslo at the Harold Pinter Theatre