The epic musical Evita returns to the West End, this time at the wonderful Phoenix Theatre for a strictly limited run, with Theatre Breaks available for all performance between 28 July to 14 October 2017. 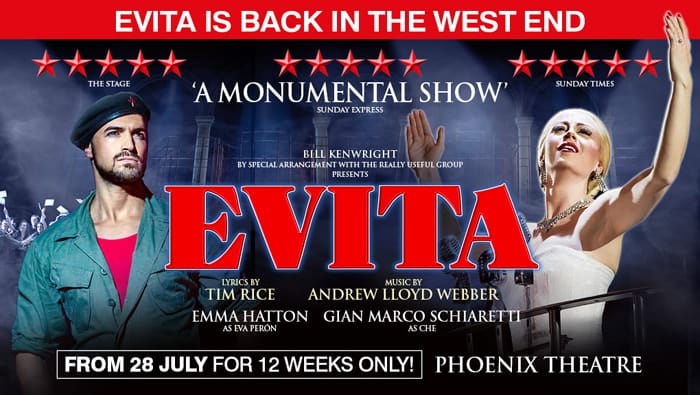 Originally a 1976 concept album it spawned three UK hit records (Don’t Cry for Me Argentina, Oh What A Circus and High Flying Adored) before it opened on stage at the Prince Edward Theatre in 1978. The production won two Olivier Awards : Best Musical and Best Actress for Elaine Paige – who went on to star in the Broadway production a year later. In America it  became the first British musical to receive a Tony Award for Best Musical.

Now, 34 years on with continuous successful tours in both the UK and world-wide, Evita  opens at the Phoenix Theatre on 28th July with a memorable musical score including the aforementioned Don’t Cry for Me Argentina, Oh What A Circus, High Flying Adored plus Another Suitcase Another Hall, Beunos Aires, I’d Be Surprisingly Good for You and On This Night of A Thousand Stars.

For those that loved it the first time around and for a new generation, the power and intensity of Evita will surely entertain the masses again this summer.

Nearest Hotels to the Dominion Theatre

The closest hotel to the Dominion theatre, for Evita Theatre Breaks, is the 3 * St Giles Hotel. Its central position and excellent facilities make this a great base for a theatre break. Some of the rooms are a bit small, but this is only a three star hotel in the very centre of the West End where space is a premium so what do you expect. I’ve stayed there twice and would do again quite happily.

If you like a bit of posh, or you are celebrating a special occassion and you want a 4 star hotel, then the Radisson Edwardian Kenilworth or Bloomsbury Street are also just behind the Dominion  Theatre on the junction of Great Russell Street and Bloomsbury Street.

And if you don’t fancy one of those (although goodness knows why) then there is the 4* Rathbone Hotel just the other side of Tottenham Court Road and in Bloomsbury, around the British Museum there is an excellent collection of smaller 4* townhouse hotels – the Montague has got to be the pick of the bunch, for very refined Evita Theatre Breaks.