Despite a slightly confusing opening  Paper Hearts, now playing at Upstairs at the Gatehouse in Highgate, is a musical with plenty to interest musicians and singers.

Following on from glowing reviews and sold out perfomances at both Waterloo East theatre and the 2016 Edinburgh Fringe, Liam O’Rafferty’s musical debut mixes old with new as the audience watches two emerging love stories from different centuries run side by side. 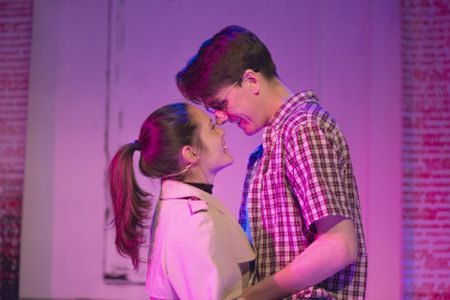 Will true love run smoothly for Lilly (Gabriella Margulies) and Atticus (Adam Small) ? Of course not!

Adam Small plays budding author Atticus Smith whose imagined characters lift off the typed pages and mold his life choices. We find out that Atticus has been estranged from his father (Alasdair Baker) for a number of years and is desperately trying to prove himself to be a worthy son. He is also in a tempestous relationship with girlfriend Alex (Sinead Wall), but you have to ask yourself “why on earth would anyone stay with such a volatile woman for so long?” He has a better, more cohesive relationship with his novel’s heroine, Yanna (also played by Wall), who asks the right questions of him and advises on which path to take on life, and love’s, rocky road. As Atticus’ struggles to find a balance between his work, his love-life and finishing his book, he meets Lilly (Gabriella Margulies) who, at first, appears to be the woman of his dreams. Of course, if it was that simple then Paper Hearts would shut up shop in the middle of the first half! We have to go through a lot of ‘does she, doesn’t he’, ‘will he, won’t she’ before we find out if  Atticua and Lilly are really meant to be together.

Personally, I think the best matched couple are Atticus and Yanna – they would have made each other very happy! 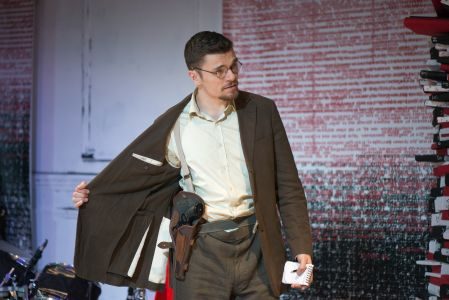 Isaak (Matthew Atkins) seeks retribution for his past crimes

The second half opens with great promise, which continues right through to the curtain call, and I could actually picture this show on a much bigger stage and bigger cast. However, the more than able actors and musicans effortlessly swap between present day and post-revolution Russia, where Atticus’ story is set. I found the Russian love story more compelling to watch as Matthew Atkins fitted better in the role as former Red Guard, Isaak, than he did as bookshop owner Norman.

Both female leads, Magulies and Wall, were great vocally and their duet in the second half was a highlight of the show.

Special mention should also go to the musical talents of Joel Benedict (guitar), Ben Boskovic (percussion), Alec White (bass), Eleanor Toms (cello) and Amy Gadyne (violin).  Both Benedict and White stood out as accomplished singer/musicians and whenever either of them were doing solo ‘spots’ I was instantly drawn to them. 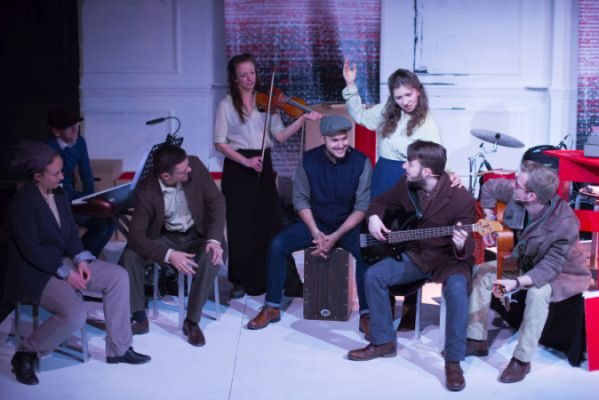 A fantastic group of musicians, singers and actors makes Paper Hearts one to watch this month

In summary, if you enjoy seeing the action up close and personal, Upstairs at the Gatehouse is the place to go this month. And with free evening parking on the Highgate streets, you can afford to get there early to treat yourself to a pre show Spanish influenced meal in this lovely pub.