Direct from a SELL OUT Worldwide tour and standing ovations at every performance, The Simon & Garfunkel Story arrives in London’s West End at the Lyric Theatre on Shaftesbury Avenue! Buy Tickets 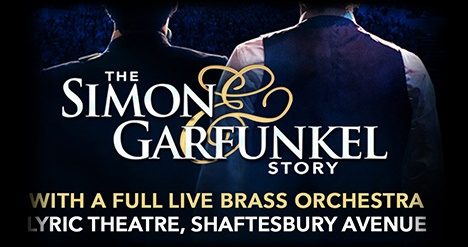 The Simon & Garfunkel Story has been seen by over 250 thousand people worldwide. The critically acclaimed and universally loved concert style theatre show tells the story of two young boys from Queens, New York who go on to become the most successful music duo of all time.

“Authentic and Exciting” – The Stage

The two actors taking on the roles of these iconic performers are Sam O’Hanlon and Charles Blyth.

Sam graduated from Mountview Academy of Theatre Arts with a BA Hons in Musical Theatre in 2014 but he is already no stranger to the professional world of performing arts and he has spent his time since touring with a variety of shows including Jackie the Musical and performing in festivals and theatres around the world.

Charles graduated from Italia Conti Academy of Theatre Arts in 2012. Credits include; Teechers, Tess Of The D’Urbervilles. Here in London he appeared in HMS Pinafore at the King’s Head Theatre.

They will be supported by Leon Camfield (bass), Adam Smith (guitar/keyboard) and Mat Swales (drums)

Get your tickets fast as this is an evening not to be missed!