Writers, Tim Firth (who also directs) and Gary Barlow and the cast of The Girls had been doing the rounds on the build-up to the opening of The Girls at the Phoenix Theatre. I don’t believe there was a daytime sofa that hadn’t been sat on or huddles round by those involved. But, come opening night, for all their exposure, I still didn’t know any more than I did from seeing the excellent film and I still hadn’t heard anything apart from the anthemic “Dare”.

I can’t believe that anyone, turning up to see the show, won’t know the story. A group of WI women get the idea to do a nude calendar to raise money for a new sofa in the waiting room of the local hospital and end up raising enough money for a whole wing!

So, what I wanted from the musical was to find out more about the people behind the story. 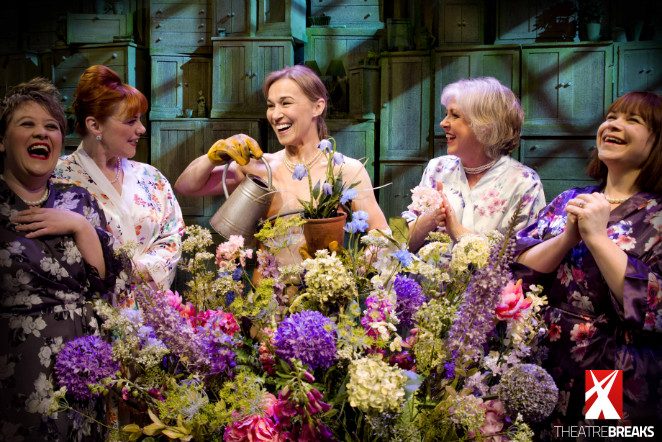 Unlike in the film, the actually taking of the photographs is dealt with in a single well-paced scene, fuelled only by a little Dutch courage and mutual support, which means that my wish is granted and the rest of the show can concentrate on developing our knowledge of the characters.

Joanna Riding (Annie) and Claire Moore (Chris) are great as the two old friends who drive the story along. Riding adds nice depth as the wife left behind after her husband dies and, apart from John’s walk up to heaven (yack!), James Gaddas makes that storyline very real. Joe Caffrey, as Chris’s husband, is understated yet bang on the money and provides one of my favourite performances,

The other girls (Claire Machin, Sophie-Louise Dann, Michele Dotrice, Debbie Chazen), who were all nominated for Best Actress in a Musical,  are super: the brash ones were brash, the bossy ones, bossy, the quite ones, well you get the idea – that particular branch of the WI must have hit a rich vein of classic Yorkshire characters that year! 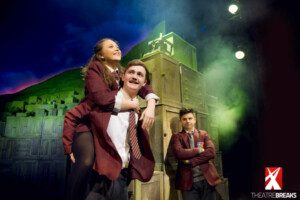 The younger generation, ably represented by Josh Benson, Ben Hunter and Chloe May Jackson (right) do a great job of offering a freshness and an enjoyable sub-plot, as they take the well-trodden path from “embarrassed” to “proud”, as all our children must.

For those at the top of the cast list, the time spent on their stories is time well spent with the quality and humour of Tim Firth’s book shining through. For the rest it just means they all get a song! 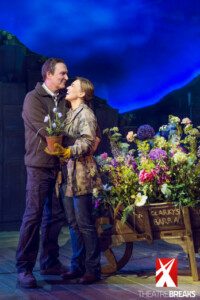 The music doesn’t always truly come alive although, the way some of the songs end on a power note, you have the distinct feeling that they had, only you have just missed it!

Riding’s renditions of the ballads “Scarborough” and “Kilimanjaro” are very moving, but it is Claire Moore’s voice we hanker to hear more of, even 30 years after first hearing her voice as Christine Daaé, in the original cast of Andrew Lloyd Webber’s The Phantom of the Opera.

The joy of having such experience on stage is that we immediately feel very comfortable in their presence and, all in all, “comfort” is a great word to describe the production. Only in the photo scene, when the ladies’ anxiety, for not flashing their fellow WI members, seems to get mixed up with an obvious anxiety for not flashing to the audience, does the “crocheted blanket of comfort” temporarily slip. Oddly it reminds me of the the football scenes, in Bend it Like Beckham, at the same theatre, which made me constantly worry that a ball might end up in the audience! I’m sure we wouldn’t mind the flash of the odd curve if it meant they can do away with a lot of unnecessary flapping around!

I was surprised to find out that the black dresses, that adorned the ladies, as they promoted the show around TV land, are actually the finale costumes from the show. It may have a truth, but visually it looked wrong, which was a pity, because Rob Jones’s design, including a glorious set that is part Yorkshire dale, part tea parlour, gives a fabulous feeling of the Jam-making, Jerusalem-singing, England that seems a million miles away from today’s beleaguered Isle. 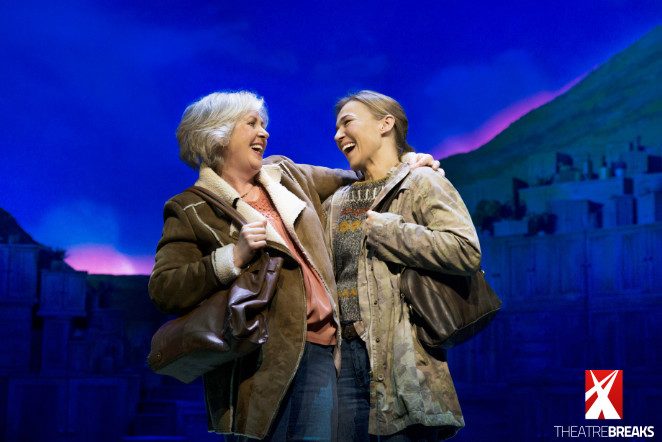 Ultimately, the show is the perfect antidote to Brexit and Trump and ISIS and I felt like Dorothy, stepping out of the monochrome world of Charing Cross Road into a technicolor wonderland and maybe, if we all moved to Yorkshire, grew Sunflowers and joined the WI, the world would seem a better place.

The Girls is on at the Phoenix Theatre and is currently booking to 15 July 2017.