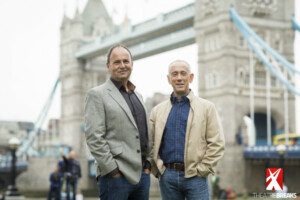 Situated on the south bank of the River Thames by Tower Bridge and City Hall, the Bridge Theatre will officially open on 26 October 2017 with Richard Bean and Clive Coleman’s, Young Marx.

The new comedy will be directed by Nicholas Hytner and will star Rory Kinnear in the title role.

2018 will start with Julius Caesar. The production will show off the theatre’s adaptability (specially designed by architect Steve Tompkins and Roger Watts to respond to shows with different formats) by being presented in a promenade format. Ben Whishaw will play Brutus.

London Theatre Company will focus on the commissioning and production of new shows. The rest of 2018 will see a wide variety of new work with inspiration taken from Harriet Lane’s novel Alys, Always, the life of JS Bach, Fred Hoyle’s novel The Black Cloud and Bizet’s opera, Carmen.

LTC’s raison d’être is to create a culture, ethos and economic model that supports writers, directors, designers and actors to work at scale in a space that is complementary to those of the subsidised theatre and West End. In time LTC hopes to open more theatres in London, to be able to host productions from the subsidised theatre, and to transfer its own productions to the West End and beyond.

Nicholas Hytner said: “We want to make bold popular theatre. We’ve commissioned ambitious plays that reach out to embrace the audience, and we’ve built an environment for them that is exciting, welcoming and flexible

The Bridge is the first wholly new theatre of scale to be added to London’s commercial theatre sector in 80 years and the first to be built outside the historic West End. It will host LTC with performances Tuesday to Sunday and will then offer a Monday night programme of intimate gigs, a live recording of a new podcast series and conversations on food, fashion, politics and science.

Productions at the Bridge Theatre

Caesar returns in triumph to Rome and the people pour out of their homes to celebrate. Alarmed by the autocrat’s popularity, the educated élite conspire to bring him down. After his assassination, civil war erupts on the streets of the capital.

On a farm outside Winchester, Ryan struggles to make a living off the land. His sister Lou has returned home after the death of their father to support Jenny, their formidable mother. Not so long ago, when a neighbour’s Labrador strayed onto the farm, their dad reached for his shotgun. Now, when Lou’s boyfriend Pete reappears, flush with money from his job at an oil refinery, Jenny fights to hold her children to the life she planned for them.

A new play by Lucinda Coxon based on the novel by Harriet Lane. Nicholas Hytner directs an unsettling story of concealed ambition preying on the self-regard of London’s literary élite.

A new dark comedy by John Hodge, screenwriter of Trainspotting and Shallow Grave, his first play since Collaborators at the National Theatre.

A NEW PLAY ABOUT JS BACH

A new play by Sam Holcroft, from the 1957 novel by Fred Hoyle, “one of the greatest works of science fiction ever written” Richard Dawkins.

based on the opera by Georges Bizet

Lucy Prebble locates the famous story of liberation, desire and death in 1950s Cuba. Directed by Nicholas Hytner with choreography by Miguel Altunaga.