Star Sixes at the O2

Hotel Package Breaks in London are now available for the Star Sixes six-a-side football competition at the O2 Arena from Thursday 13 July to Sunday 16 July 2017.

Packages including hotel accommodation and our special tickets (if you have been to the O2 with us before, you will know the surprise that awaits you on arrival at the venue) are now available to book for the three days of league matches and the two finals sessions at the weekend.

The leagues have been announced (below) and England are up against Spain, Scotland and Mexico in group A, with teams including Germany, Brazil, France, Italy and Portugal waiting to meet us if we get through the league stages to the knock out rounds. 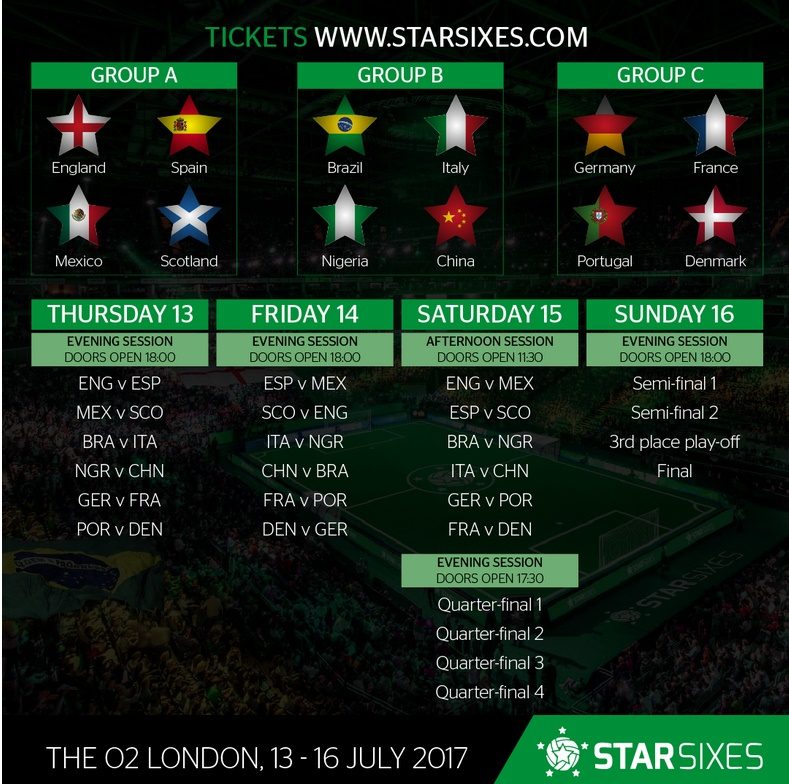 Each of the first three sessions will see every team play one match, with doors opening at 18:00 on Thursday and Friday and 11:30 on Saturday. The finals sessions, are on Saturday evening and Sunday evening.

The Stars – who who is playing?

With more names to be announced, already scheduled to line up for England are superstars including Steven Gerrard, David James, Michael Owen, Rio Ferdinand and Emile Heskey.

In addition, stars from across the footballing world will also turn out for their countries. Great players such as Robert Pirès, William Gallas and Marcel Desailly for France, Michael Ballack and Jens Lehmann for Germany, Deco for Portugal, Don Hutchison and Barry Ferguson for Scotland and Roberto Carlos for Brazil.

Our Star Sixes Packages include hotel accommodation at your choice of a range of London hotels – the 5 star Intercontinental London O2 and the 3 star Holiday Inn Express London Greenwich are both very close to the venue, alternatively or you can choose one of the other 60+ hotels we have available in central London.