As tickets for Harry Potter and the Cursed Child are so hard to come by, it is lucky that our packages for the Harry Potter Studio Tour offer Harry Potter fans such a great experience.

The Warner Bros. Studio Tour, celebrating everything that is Harry Potter, is very much a living breathing experience. Of course there are the permanent exhibitions but more and more fascinating attractions are being added: some permanantly, other experiences only temporary, making our Harry Potter Studio Tour packages exciting, new and interesting even for regular visitors. 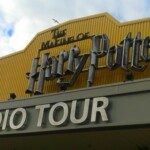 Discover the behind-the-scenes secrets of everybody’s favourite house-elf in this special feature dedicated to Dobby. Learn about the multiple processes and techniques that brought Dobby from a tennis ball on a stick to a full sized, intricately detailed, physical model and make Dobby copy your movements in an interactive experience that demonstrates the motion capture technology used to bring CGI characters to life on screen.

See the magical costumes created during the ten years of filming, from Hogwarts school robes and Hermione’s beautiful Yule Ball gown to ghost costumes that could appear transparent via visual effects. Discover the incredible craftsmanship and artistry that went into some of the best never-before-seen costumes from the magical film series. See the whole process from initial designs to the finished costume, as well as learning how new clothes were made to look centuries old or battle-torn through the art of costume distressing.

Delve deeper than ever before into the sinister world of Dark Arts! Try out wand combat techniques against a Death Eater or walk down a darker, spookier Diagon Alley. The lights in the wizarding shopping street will be dimmed, the music will become more foreboding and the set will be patrolled by He-Who-Must-Not-Be-Named’s followers.