On 31st March, the fifth anniversary of Warner Bros. Studios world famous tour,  an exciting, permanent addition to The Making of Harry Potter tour will open to visitors.

The Forbidden Forest may be strictly off-limits to Hogwarts students, but for the first time this March, guests on Harry Potter Studio Tour packages are invited to explore deep into the grounds of the Forbidden Forest. 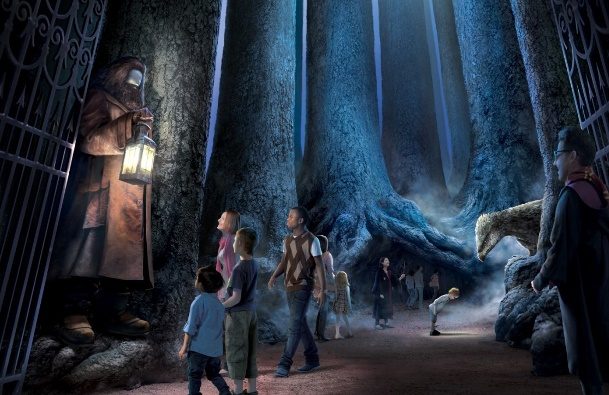 Well known to beloved half-giant Hagrid, our guests will walk beneath the giant entwined roots on their journey through the dark, imposing trees of the Forbidden Forest for the first time. You will encounter Buckbeak, and have the opportunity to bow to the majestic creature. You will see, up close, the incredible detail and craftsmanship that went into creating the magnificent Hippogriff. Each feather had to be individually inserted and glued by the Creature Effects team who were busy adding feathers right up until the final moment Buckbeak was needed on set for Harry Potter and the Prisoner of Azkaban.

As you venture deeper into the depths of the forest, you will come face-to-face with Aragog, the Acromantula. Emerging from his dark lair, the enormous spider will appear before visitors along with spiderlings from his family.

Officially opening on Friday 31st March, the new, must-see expansion has been designed and built by many of the award winning crew members who worked on the hugely successful film series.

There will also be an opportunity to take control of the weather and discover the techniques used to create a realistic forest within a film.

Stuart Craig, Production Designer on all eight Harry Potter films, added: “The Forbidden Forest is full of mysterious, fascinating and sometimes threatening forces. It represents the great unknown compared to the comfort and safety of Hogwarts and the Gryffindor Common Room which makes it so interesting and important to the development of the story.”

The Forbidden Forest will open on Friday 31st March and entrance will be included in the tour ticket and hotel package price.