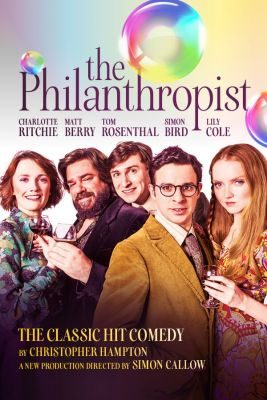 Adapted by Christopher Hampton’s from Moliere’s ‘The Misanthrope’, The Philanthropist first premiered at the Royal Court theatre in 1970. Considered by many as Hampton’s finest play, it’s a biting and a fiendishly clever inversion of the original, with actor/director Callow’s new production being called “intellectually stimulating, touchingly sympathetic and gloriously, gloriously funny…” (Sunday Times)

Out in the ‘real world’ the Prime Minister and his cabinet have been assassinated and England’s most treasured writers are being murdered one by one! Back in the cosy bubble of university life, a bachelor don anguishes over sex, marriage, anagrams and the meaning of life. Did someone suggest academics were ‘out of touch’?

Ticket and hotel packages for The Philanthropist Theatre Breaks sold out with favourite hotels including the Radisson Edwardian Leicester Square, the 3 star St Giles Hotel and The 4 star Strand Palace Hotel .