Russia’s critically acclaimed  Sovremennik Theatre returns to the West End this spring when it comes to the Piccadilly Theatre, with a triple bill of its most celebrated plays: Three Sisters, Three Comrades and Two for the Seesaw. 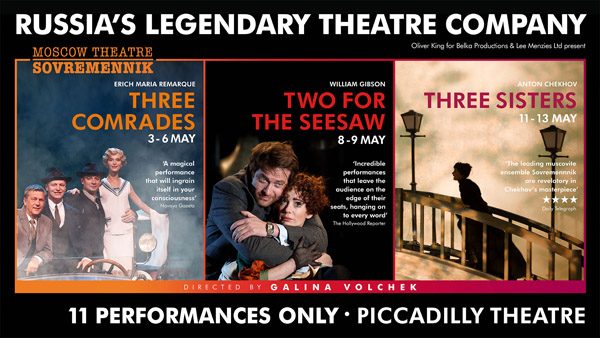 Three Comrades – based on the novel by Erich Maria Remarque,  in which three wartime friends, trying to make ends meet in an unknown town, in 1920’s Germany, meet a mysterious woman.

Two for the Seasaw – William Gibson’s is about a man struggling to deal with life after a divorce and the relationship he starts with a struggling dancer.

The London season will feature a cast and crew of over 100 people including the acclaimed Russian film, theatre and television actress and humanitarian Chulpan Khamatova.

All three shows will be performed in Russian with English surtitles.

Further information can be found at http://www.sovremennik.co.uk/