OK first off let me say that I loved Ricky Whittington at the New Diorama Theatre. It’s just I have a lot to say and I was worried that you might not get to that bit if I left it to the end of the review!

I recommend seeing it and, given the size of the auditorium and that some performances are already sold out, I recommend booking tickets asap and here is the link for the Box Office for those of you who don’t want to read further – it’s alright: I don’t blame you!

Sometimes we forget how strong people’s negative connotations with the word “Panto” can be. It can be a useful descriptor but it can also be a powerful deterrent. So, let’s agree, in relation to Ricky Whittington, if you see the word “Panto”, just ignore it.

OK there is a guy in drag and some audience participation but, as so many of you hate even the word “panto”, I just thought I would say something.

In fact, from here on I will refer to “Panto” as “Murp” just so you don’t get confused and take your kids… DON’T TAKE YOUR KIDS! For goodness sake, don’t take your kids! In fact don’t even let them read this review!

So Ricky Whittington and His Cat is advertised as a “Murp for Millennials”. See!? It sounds better already! But even with the pedigree of the New Diorama Theatre and production company Fight in the Dog and the talents of Charlotte Ritchie, you still take a risk, don’t you? Well, not with this witty, tightly-forged, edgy re-invention of the classic mayoral tale you don’t! 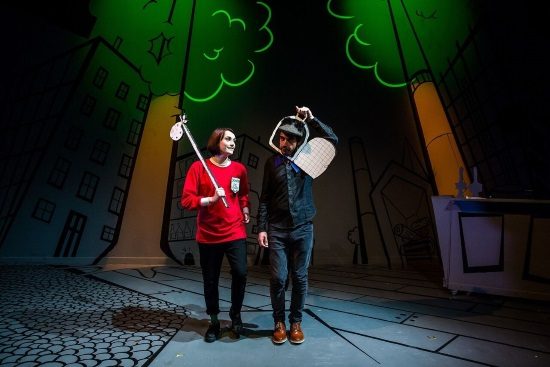 Ricky Whittington (played by Ritchie) is an annoyingly positive and distinctly stupid young man from somewhere up north. He arrives in London, with his cat, to find a cynical population facing poverty and corruption. After losing all his money and having to get a job cleaning in City Hall, Ricky, accidentally, becomes mayor, much to the annoyance of Alice Fitzwarren who wanted the job and is clever and is interested in politics, so would have been better than Ricky.

Ricky promises to clean up London but quickly falls under the spell of the corrupt King Rat and, rather than helping London’s inhabitants out of their slump, becomes part of their problem.

Of course, in a different show, Ricky Whittington could be a searing indictment of the world we live in today, but, even as a Murp, it successfully tears into the face of the establishment, like a cage of hungry rats. At times it is very dark, but generally it is just very funny and, as it is Christmas, we are only here for the laughs.

This is where calling the show a panto… sorry, a Murp, pays dividends. Great jokes work by setting up expectations and then exploding them. By telling us, that Ricky Whittington is the Murp, Dick Whittington, Fight in the Dog, has already set up all the jokes in our head, so the cast can pretty much spend the evening going straight for the punchline. Having said that, you don’t have to be a Murp aficionado to enjoy the evening – as proved by Randy the American in the front row – it’s OK, David Elms (he plays Ricky’s mum: Pig Pam), I won’t mention Randy again!

Although the show starts in a tenement, just as the building is about to be knocked down, killing its last remaining inhabitants, Mrs Hickerty Crickerty and her two sons, in the process (I said it could be dark), all that terrible, bad news is quickly forgotten and we quickly meet Ricky and his Cat and we are soon enjoying a jolly tune or two.

Charlotte Ritchie is perfectly cast as Ricky. Whilst she is a lovely actor, Ricky is not too far from the characters Ritchie’s fans know and love from Siblings and Fresh Meat – well it would be pointless casting her otherwise: this is Panto for goodness sake!

If this is a Murp for Millennials, Ricky is the Millennial we all want to be: happy, lucky and selfish and Ritchie’s light touch keeps the whole thing merrily bobbing along! Ritchie is also an accomplished singer and her physical comedy is good too, so all-in-all the crowds at the New Diorama should feel very spoilt.

Ricky’s cat is unapologetically played by Omar Ibrahim. He is as far from a perky gymnast, in an animal suit, as it is possible to be: propping up the bar, drinking milk from the bottle, trying to nod his way into a conversation or avoiding questions about his dead wife a kids, he spends much of his time watching the action, but, just like a cat, you can’t always tell what he is thinking: is he yawning just because cats do, or because he is genuinely bored? 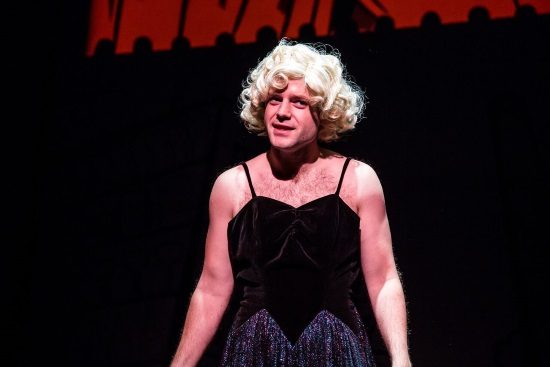 Of course every good Murp has to have it’s Dame, enter stage right, well everyone does at the New Diorama, David Elms. If Ricky Whittington is NotPanto, Pig Pam is the anti-dame. Constantly playing with his Marilyn Monroe wig and tugging at the straps of a dress that barely covers his hirsute chest, Elms strides on stage with the purpose of a deflated space hopper left out in a pile of autumn leaves (go-on, guess what’s outside my office window!). But within moments he has the audience just where he wants them: in seats that they have paid for!

Elms’s experience in stand-up shines through and his understated delivery style is perfect for establishing a relationship with this particular audience of cynical, London, millennials – as atypical a panto audience as Elms’s dame. Elms effortlessly sets the tone and introduces us to some of the themes of the show – for example it is here we first hear the word Murp (OK, so I didn’t make it up).

King Rat is superbly played by the gurning and gyrating Rob Carter (also an alumni of Siblings and Fresh Meat). Part Child-Catcher, part Steptoe, part property-developing spider-thing he insinuates himself onto the stage and into the trust of the new mayor. Carter’s Rat’s greed is palpably sexual and just talking about money and his plans for making it, brings him close to pelvis-pumping orgasm – his visage a permanent, leering, cum-face.

Of course, like most of the cast he also plays a multitude of other roles, including Father Christmas, which is nice!

Ellie White’s angsty Alice is the object of Ricky’s desire. She too is a refreshing version of the simpering panto staple and v funny: posh and angry and fixated and earnest and super unconscious of how annoying she is. You’ll drive yourself crazy trying to work out where you know her from until you Google her to find out she played Princess Beatrice on Channel 4’s The Windsors. Great in both roles!

All the other characters are brilliantly provided by Rosa Robson and Emily Lloyd Saini.

Robson, as blindly optimistic Mrs Hickerty Crickerty, gives us a stand out Nonsense song to rival Mary Poppins’s Supercala… which is balanced nicely by a rather shocking opening to act two that would rival any duff-duff moment from  Eastenders.

Emily Lloyd Saini covers everyone else, including an overly philosophical barmaid and a troubled mother with a giant child as a rather random back-story. Talking “random”, look out also for the Time Cop, played, on the night I saw it, by Richard Gadd – I’ll say no more: now you’ll have to go and see it!

A running gag is the shoe-horning in of the songs, but unlike many panto’s, the songs in this Murp are proper highlights, whether they are showcasing the lyrics of Daran Johnson, David Pegg’s and Johnson’s notes or the arrangements by Freddie Tapner. Special mention should also go to MD and lone pianist Ed Hewlett who keeps the cast tight and the action rolling along with witty and sympathetic under-scoring in the best traditions of silent cinema!

In many ways Daran Johnson’s and Liam Williams’ Ricky Whittington is not helped by being called a panto. Unlike Pinocchio at the Kings Head, which also successfully re-invents the panto, here the pantomime serves to subvert the plot rather than to celebrate the tradition of panto itself. That said, Johnson and Williams obviously understand and love the genre: how else can they delve so successfully into its goodie-bag of fun.

But Ricky Whittington is a celebration of that most millennial of concepts: “disruption” – and like all good disruption – it both destroys and creates.

Director, Alex Clatworthy, oversees the whole thing with a firm hand and a light touch and, like all good pantos, it is hard to spot the line between what is scripted anarchy and what is just anarchy. The same goes for the Sam Rayner’s choreography.

Most of you will not get to see Ricky Whittington: it’s harsh but it’s the truth! For those who do, the cafe does 30% discount on pre-theatre sandwiches after 5:30 – well I always try to make my reviews as useful as possible!

Here is the website again – newdiorama.com  – and, for those of you so un-millennial as to use their mobile for talking to people, the Box Office number is 0207 383 9034 – you might need it when only returned tickets are available for re-sale.

Ricky Whittington and His Cat

… seriously what more do you want?

Ricky Whittington and His Cat

By Daran Johnson and Liam Williams