Sometimes theatre delivers a surprise. Sometimes you get exactly what it says on the tin – and this tin probably says Quality Street! 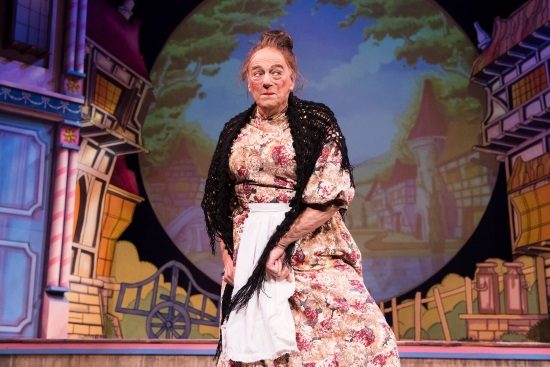 I don’t know whether you have ever been surprised by anything that Roy Hudd has done, but if you were it was probably a long time ago.

So even though you have not seen Mother Goose at Wilton’s yet, you could probably write the review you are now going to read… Oh yes you can!

Roy Hudd is a consumate professional who has been honeing his skills for over 80 years – I am assuming he was born on a stage, he was certainly born to it!

In Mother Goose he has a story as charmingly old-fashioned as he is. Mother Goose is given a golden-egg-laying goose by the good fairy of the panto – the delightfully dotty, Virtue, played by Julia Sutton.  But the ensuing riches go to her head and, egged-on (excuse the pun) by Vanity, the baddie of the piece played with suitable velvet-clad menace by Gareth Davies, she throws out her goose (Called Priscilla) and alienates the whole village. Booooh!

So that is the story out of the way, now for the fun parts. It’s all there: the magic hat gag, the 12 days of Christmas (“Five toilet rooooooolls”), the cute juvenile chorus, the sexy older dancers, gleaming and fresh from their end-of-the-pier summer shows and cruise ships, the awful jokes courtesy of everyone on stage but especially Ian Jones, who plays Mother’s Gooses’ son, Willy (we all dutifully shout out “Watcha Willy” everytime he comes on stage), plenty of “Oh No He Isn’t” (but not much “He’s Behind You”) jolly clicktracks to hide the juve’s singing, audience participation and a sing-along at the end!

Opening nights are always a little strange because of the lack of kids in the audience, but we all dutifully joined in – even Ethel who was celebrating her 96th birthday with her grandma and grandad – and Roy managed to scrape 5 kids together for Old MacDonald at the end.

It is when he is off script that Roy Hudd comes alive – whether he is working with the kids on stage or talking to the audience. His warm, relaxed, manner is like a Chistmas day afternoon in front of the fire, with a full belly, a glass of mulled wine in your hand, a pile of sweet wrappers on the arm next to you and watching the kids play twister, all wrapped up in one man.

If this isn’t what Christmas is all about I don’t know what is! A joy to behold.