“Last night I dreamt I returned  to…”

No, not Manderley but you get the drift. Thus the opening words of Her Aching Heart at the Hope Theatre set us well and truly amongst the pages of the romantic novel. Not, however, a well-thumbed copy of Daphne du Maurier’s Rebecca, but an altogether lesser Mills and Boon-esque tomb.

Fortunately, Her Aching Heart as more laughs than Rebecca! 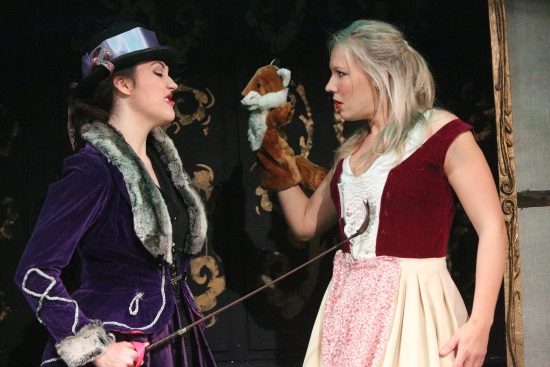 Harriet and Molly come from different sides of the hunt – Harriet a whip-cracking member of the aristocracy, Molly a lowly peasant girl – but across a social divide, littered with the bodies of various dead and dying woodland creatures, they meet, hate, argue, fight, swoon and fall in love.

We experience the story as it is read by two modern-day girls who just happen to be reading the same book. They too are destined to fall in love but, in comparison to the tangled web woven in the book, their relationship is much simpler – which is lucky really because I don’t think I could cope with much more confusion.

It is fast-paced, irreverant and jolly good fun and the piece has a good, natural rhythm although, at times, it lacks definition, with the destinction between the roles not always clear.

Both actors (Colette Eaton as a forceful Harriet and Naomi Todd as a breathy Molly) have a good understanding of the job in hand and work well together, with some suitably over-the-top stylised acting and some superbly comic moments: I loved Eaton’s Harriet, trying to put her boots on without the help of a maid and Todd’s bobbing maid when she did finally appear.

The music wasn’t remarkable, although the wonderfully dark, dark humour of “Heart Surgery” certainly seemed to catch the audience by surprise: maybe there should have been more moments like it or maybe it should have been in another show.

I like the convention of the scene titles being placed on cards at the begining of each chapter of the Gothic novel,  but the position of the board was the other side of the pile of onstage props, which meant that it was awkward, for the actors, to reach and update, at the beginning of every scene.

Because the Hope has a very small acting space anyway and because there was also lots of “business” with props and scenery, the mix, of what was scripted and what was just plain awkward, left some parts feeling unpolished in an otherwise slick production, pacily directed by Matthew Parker.

Hats off too to Alex Payne. There can not be many fight directors that could cram in so many visual jokes, in such a small space and in such a short amount of time, as in the thrilling sword fight in act two.

So Her Aching Heart is a bundle of innocent fun, full of swoon and pout, and I would happily see a comic, Gothic, romantic, musical again and I am always a happy boy when going to the Hope Theatre: you should try it!