Testosterone is a hilarious look at the antics and routines of the inhabitants of a male changing room from a rather unique aspect: that of trans man, writer and actor, Kit Redstone.

The life-learnt social etiquettes, the unspoken rules and the ever-shifting, invisible boundaries are all a mystery to Kit, as he negotiates his very first visit, to a male changing room, just a year after he descended the stairs from the doctor’s surgery, having received his first injection of testosterone.

This chance encounter has Kit asking about the nature of the man he is and the man he will become. 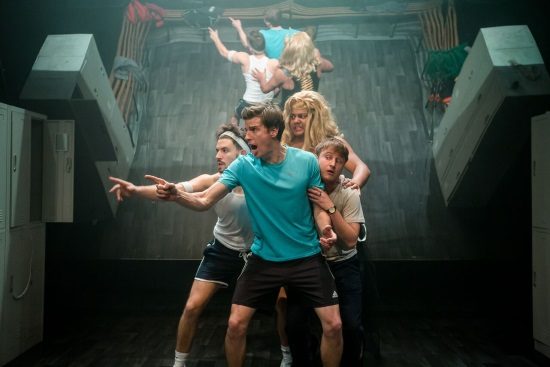 Whilst Testosterone is a wonderful chance to get to meet Kit and hear a little about the life of a trans man and his world, this is not a particularly illuminating evening as far as the male condition is concerned. It is not a dissection of manhood nor an evaluation of being. It is not a particularly deep insight into the journey from the envy of maleness to its achievement, although it features some interesting anecdotes and, if anyone is wondering, it is nothing like any male changing room I have ever been to.

Don’t get me wrong, what we get is a treat.

I loved the physical nature of the performances, I loved the way the incongruities of the male sex were exposed, I enjoyed Kit’s engaging manner, effortlessly breaking down the forth wall and inviting the audience into his exciting, yet slightly scary, new world. I laughed, as we all did, as Kit’s fellow cast members, Daniel Cooper, Julian Spooner and Matthew Wells enact his distorted interpretation of what, he discovers, it is, to be a man. I appreciated the slick mechanics of the production and the conventions that it applied to the telling of the story. I loved the humour, which, far from the faint praise promised, by the phrase “often funny”, in the press release, was regularly pant-wettingly hilarious.

But, it can be no wonder, that Kit is having a “crisis of masculinity”, if his view of manhood can be portrayed by such a limited array of comic, two-dimensional characters as the ones he stumbles across in the changing room.

Yes we can get the joke, but, with such a broad brush the evening often fails to paint the finer points of the subject matter that it raises.

One moment that encapsulates this, for me, is when one of the men in the changing room demands his towel back from an otherwise naked Kit. Kit gestures to the towel and says (aside) that the reason he cannot return it “is obvious”.

Men have many reasons why we would rather wear a towel in a changing room, than not, so to pass that moment off as “obvious” shows how far Kit has to go to understanding his new-found role and not whether he is pre-op or not! This moment on his journey is completely lost.

So rather than “a rare, truthful… insight into what it means to be a ‘man’ “, we get a superb physical comedy about what would happen if you put a drag queen, a sports jock, a dude and a trans man into a small changing room with only the trans man getting out to tell the tale.

Of course, there is nothing wrong with that, but maybe, with more time spent examining the nature of the beast, Kit’s insight might be fascinating as well as hilarious.

Ultimately, although the exercise is a good one, I fear that the subject, of what it means to be a man, is either not that interesting or too complex to be handled in just over an hour. I fear it is the former, I hope it is the latter.

Joyfully exposed by the talented team of Rhum and Clay theatre company, Testosterone is on at the New Diorama Theatre until 03 December 2016
Performance Time: 1 hour