Hope you are not experiencing too much cold wherever you are. Down here in London, whilst the temperatures have dropped considerably, we are having some glorious sunny Autumn days which makes dog-walking an almost pleasurable experience!

If you are a historical reader of my blogs, you will know by now that I love London during the Autumn/Winter evenings when all the shops are lit up and theatres are a warm welcome retreat from the cold outside. It feels more “right” to go to the theatre when its dark because during the summer months I always feel I should be out enjoying the long light evenings and fresh air – except when you are sat in the glorious outside space of the Regent’s Park Open Air Theatre, of course, having the best of both worlds! 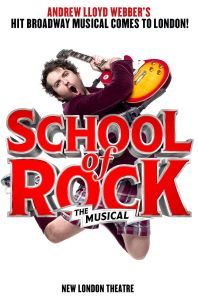 So last week, we Theatre Breaks Angels were lucky enough to go to a preview performance of Broadway hit transfer School of Rock at the New London Theatre. This is the show that producer/lyricist Andrew Lloyd Webber announced would open in London before the first night reviews were written in New York last December. Well, he was spot on thinking that the British public would love the upbeat show with a packed stage of amazingly talented child actor/musicians. You have to see it to believe it! The children playing their own instruments are jaw-droppingly good and often you can’t quite believe what you are hearing. I imagine there are thousands of adults who aspire to be as good at playing the electric guitar as these 12 year olds on stage. This is definitely a show you can take your family to – the age range appeal would be from 7 – 70 years. And it’s certainly a show that leans towards having relaxed performances, so I hope that its something that happens in the not so distance future. 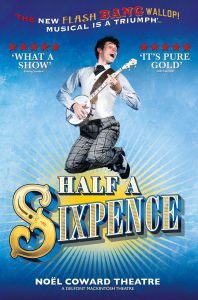 Our next venture into the West End is to see the Chichester Festival transfer of Half a Sixpence at the Noel Coward Theatre of which the male lead, Charlie Stemp, has critics falling over themselves with compliments receiving 5 stars from a number of the broadsheets. People of a certain age will remember the original, back in 1963, which was adapted into a musical from an HG Wells novel as a vehicle for cheeky-chappie popster Tommy Steele. He also went on to star in the Broadway production and the 1967 film version. Could it be that this critically acclaimed show, updated by Jullian Fellows (who also write the aforementioned School of Rock), will make a house-hold name of young Mr Stemp as it did the twinkle-toed banjo-playing Steele? We have a lot of expectations for this show and fingers crossed we come out with as big a smile on our faces as we did after School of Rock.