Shopping is something that needs to be done with vigor, enthusiasm and total commitment: otherwise it is just browsing. The same goes for Mark Ravenhill’s 1996 play Shopping and F**king.

Fortunately that is exactly how the Lyric Hammersmith’s Artistic Director, Sean Holmes and his excellent cast, go about it. 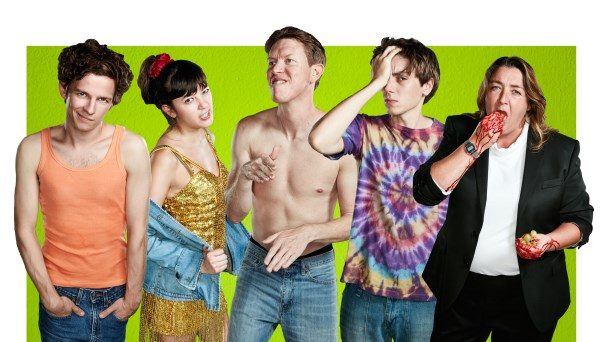 This production puts us firmly in QVC land where drugs, sex and pot noodle are all for sale, with everything and everybody on stage sporting a price tag.

Robbie (played by Alex Arnold with great thought and sympathy) has bought Mark and Lulu from a fat guy in a supermarket. It is part of his attempt to make life as transactional, as emotionless as possible. Now they all live together, f**king and eating hotpot. Unsurprisingly, they all have their issues – there is no everyman in this piece – which is probably why so much effort is spent on bringing the audience into their rather extreme world, or maybe Ravenhill just makes sure we “get it” anyway.

Of course it was more extreme in the pre-internet world of 1996 – from the title, down. Now it is less so and, sadly, there is less of a disconnect between the two worlds – which makes Ravenhill’s writing, 20 years ago, even more extraordinary. Does this make the characters more human, their plight more touching? Certainly there is not an unsympathetic character on stage.

They are all given their protective armour and their opportunity to expose their vulnerable underbellies. David Moorst as Gary, a young rent boy, who Robbie buys, probably achieves this best – certainly his story has the furthest to go – but Sam Spruell as Mark and Sophie Wu as Lulu both give us well-rounded performances, allowing us to see beyond the two-dimensional characters presented on the huge video screens that dominate the stage and amplify the action with deft use of onstage cameras and a green screen.

And that is what makes this production so successful. It would be all too easy to scream this 20th century rant-fest with actor-like indulgence or acedemic abstract. Instead we are given five measured performances that have depth and quality.

The fifth is Brian (calmly and coolly played by Ashley McGuire). Studio exec, drug dealer and benign dictator; dressed in white she delivers the lessons that need delivering – a cross between gangland boss and Powerpoint-presenting salesperson.

The last speech is bravely delivered by a member of the audience and nicely completes the link between 1996 and 2016. It tells of a future that, as it turns out, is not so distant after all.

Shopping and F**king is one of those plays which, at the start, you just need to take the brake off and then, for the next hour and a half, hang on for dear life. Everyone involved in this production should be congratulated for making it a breathtaking 90 minutes.

I did wonder whether we should have been left with a more uncomfortable finale, but a slow smooch with cast, audience and crew swaying gently from side to side, in loving harmony, did bring the rollercoaster car to a surprisingly gentle stop.

Well I suppose they did get our money first.