Floyd Collins is a Kentuckian caver, looking to make his mark on the world, who gets stuck in one of the caves he is exploring. The musical is about what happens next.

It is a story rich with personal journeys. The changing state of mind of a man trapped and facing death, his brother’s realisation of helplessness, his father’s struggle to maintain his faith, all set against the constant of the trusting naivety of his sister.

There is lots to recommend the show. The music is dynamic and varied: a modern version of a 1920’s Kentucky string ensemble, with added keys, under Tom Brady’s excellent direction, brings to life a rich, eclectic score. Written by Adam Guettel, it is full of the broad, musical landscapes of Aaron Copeland and the infectious yodelling and soulful ballads of Kentucky bluegrass and is a joy to listen to.

The cast don’t let the band down either, with notable vocal highlights provided by Rebecca Trehearn as Floyd’s sister Nellie and Floyd himself, played with infectious enthusiasm, by Ashley Robinson. 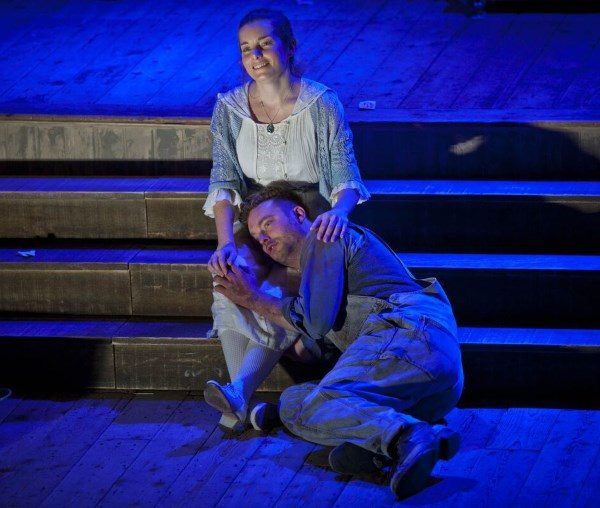 The show works best when there is interaction between Floyd and other members of the cast – in songs such as Daybreak, Riddle Song and The Dream with his brother, Homer (played by Samual Thomas) and sister (Trehearn) and in the scenes with, reporter, Skeets Miller played by Daniel Booroff. The problem is that, because Floyd is put out of action right at the beginning, opportunities are limited. So we see no more of the relationship between Floyd and his father or Floyd and his friends than we see he has with the rest of the “carnival” that descends on the town – maybe that’s the point.

From the beginning, we know the outcome of this nail-biting story, so the tension depends on the telling of the story, rather than the story itself. Despite the best efforts of an excellent cast and crew, the book falls short of this and, unfortunately, the piece struggled to truly come alive – which is a pity, because it was so nearly there.