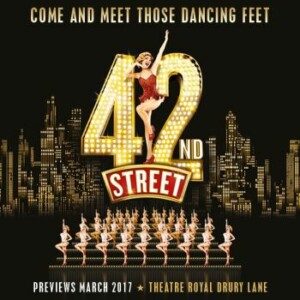 It’s true – you can’t keep a good show down and so we have the triumphant return of the Broadway smash-hit 42nd Street coming to the Theatre Royal Drury Lane in April 2017 – having been vacated by the glorious Charlie and the Chocolate Factory.

When last in the West End in 1984, at the same theatre no less, the indisposition of the lead actress gave an unknown understudy by the name of Catherine Zeta Jones her chance to shine and the rest, as they say, is history. Spookily, this is pretty much what how the plot of the actual  show goes.

I am very pleased to say I saw the aforementioned production, although I can’t be sure I saw Miss Zeta Jones, and I am very much looking forward to seeing the 2017 version.

It is exactly what musicals should be with a rags to riches tale, sequined gowns, men in tuxedos and tap dancing – oh so much amazing tap dancing – a dance discipline I completely & utterly failed in when at drama school which is why I absolutely love watching the masters on stage – I am in total awe of them!

As well as the sensational dance numbers (on par with Crazy for You & Anything Goes in my humble opinion), there’s also the fabulous musical score which includes well known songs such as Keep Young & Beautiful, We’re in the Money and Lullaby of Broadway. Be assured We’re in the Money will get an encore mid-act (well, it will from me anyway!)