Nice Fish theatre breaks are no longer available to book.

Oscar and BAFTA winner, Mark Rylance, brings the icy Minnesota winter to the stage of the Harold Pinter theatre.

After a sold out season off-Broadway, ‘man-of-the-moment’ Mark Rylance returns to his homeland to star his own comic play Nice Fish, which he wrote with  critically-acclaimed  Minnesotan contemporary prose poet Louis Jenkins. 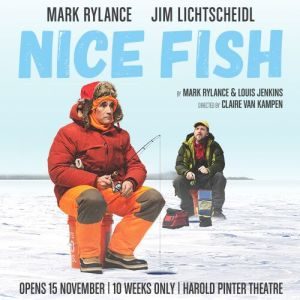 Drawing from his own teenage experience of the frozen winters and culture of the American Midwest, Nice Fish sees two men sitting on a frozen Minnesota lake with the ice beginning to creak and groan beneath them.  It’s the end of the fishing season and two old friends are angling for something BIG!